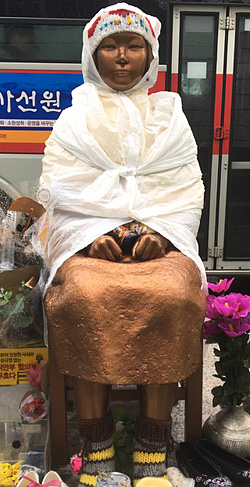 A statue representing the victims of Japan’s wartime sexual slavery, which Tokyo wants removed, stands on Monday behind the Japanese Consulate in Busan in the rain. [YONHAP]

The continued absence of Japan’s envoy to Korea is leading to worries about a fraying of bilateral relations.

Tokyo recalled Ambassador Yasumasa Nagamine over a month ago to protest the installation of a statue representing the victims of Japan’s wartime sexual slavery behind its consulate in Busan.

Korea has to show “concrete action” that will lead to the removal of the statue for Tokyo to consider sending Nagamine back to Seoul, Kyodo News reported Sunday.

Korean Foreign Minister Yun Byung-se was reported to have told Japanese Foreign Minister Fumio Kishida that he will try his hardest to resolve the issue in bilateral talks last Friday. Kyodo reported, citing a diplomatic source, that Foreign Minister Yun introduced steps the Korean government will take, without going into further detail. The Korean Ministry of Foreign Affairs said after the talks on the sidelines of the the G-20 foreign ministerial meeting in Bonn, Germany, that the two ministers agreed to “make efforts” to ensure that the statue issue “does not have a negative impact on the overall relations between the two countries.”

Ambassador Nagamine and Yasuhiro Morimoto, Japan’s consul general in Busan, were recalled to Tokyo on Jan. 9 in protest of a local civic group’s installation of a monument in Busan at the end of last year. The statue of a young woman represents the women forced into sexual slavery by the Imperial Japanese Army before and during World War II, euphemistically referred to as comfort women.

A “final and irreversible” deal struck by the Korean and Japanese foreign ministries on Dec. 28, 2015, was intended to end the long-running diplomatic battle over the comfort women victims by agreeing to a Japanese government apology and a 1 billion yen ($8.8 million) fund for the victims.

Under the deal, the Korean government “acknowledges” that Japan is concerned about a similar statue across from the Japanese Embassy in Seoul and promised strive to “solve the issue in an appropriate manner.”

But Seoul maintains that any decision to remove such statues is up to the private civic organizations that installed it. Tokyo has been insisting on the removal of the statue in Seoul and now Busan.

Japanese Chief Cabinet Secretary Yoshihide Suga said in a briefing Monday that Tokyo with be “paying close attention to the Korean government’s response” to the comfort women statue issue.

“We have continued to strongly request for the faithful implementation of the bilateral agreement,” he said.

Suga added that Nagamine’s return to Seoul was “undecided,” adding the date “will be determined after a comprehensive review.”

Cho Hee-yong, director of the Center for Japanese Studies at the Institute of Foreign Affairs and National Security of the Korea National Diplomatic Academy, pointed out the continued strains in the relationship “are not helpful to either country.”

“The measures Japan took, recalling its ambassador, suspending a currency swap and restricting exchanges of high level officials may from Japan’s perspective be an expression on what it considers the gravity of the statue issue. But Japan is also taking measures that go against the principle that it will work toward areas of mutual cooperation such as security, economics and cultural exchange. And like ping-pong balls being passed back and forth, we have arrived at the current situation.”