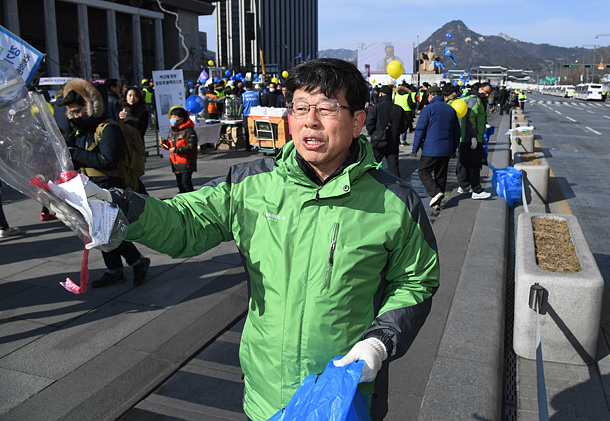 Jang Man-soo, deputy director of Living Environment Division at the Seoul Metropolitan Government, has not missed one anti-Park Geun-hye rally since its commencement in October.

Jang, the man behind the full-scale cleanup operations at the rally points in central Seoul, including Gwanghwamun Square and the streets in the vicinity of the Constitutional Court and Seoul Plaza, can clean up the area in 20 minutes with some 100 street sweepers, all moving in uniformity under his directions.

“When the area is filled with people, we can’t do much,” Jang said hours before the rally on Saturday, as he paced from one trash bag to another in Gwanghwamun Square, tying up the filled ones. “We need to move very quickly as soon as the crowd begins to thin out when the marches end.”

On Saturday, Jang and 139 city government officials and street sweepers cleaned up the area within 20 minutes of the rally’s completion. The authorities opened up Gwanghwamun Square to traffic at 11 p.m., some 40 minutes earlier than they had expected.

Jang, popular among his coworkers for his immaculate management of the streets after the rally, has been working every Saturday from Oct. 29, when the first anti-Park Geun-hye rally began over her influence-peddling scandal with her longtime friend Choi Soon-sil.

His work starts with circling the Gwanghwamun Square and Seoul Plaza areas at around 1 p.m. and ends by the time the traffic restrictions are lifted in the area at night.

Some 100 city government officials and street sweepers roam the areas before the crowd begins to gather and check on the trash collection requirements. Some 40 volunteers are also dispatched to the cleanup operation.

But when the crowd grew beyond the usual turnout on Dec. 3 when some 1.7 million people participated according to the rally organizers, about 400 people were dispatched to the streets after the rally. City government officials, street sweepers and volunteers communicate via an instant messaging app, Jang said.

Communicating constantly, the workers inspect the state of littering around the clock, install trash bags and collect full ones in an organized manner. They tail the rally participants as they march through central Seoul and collect the trash.

Jang said while many rally participants have been good about cleaning up after themselves, some street vendors are proving troublesome for the workers.

“Some street vendors litter the ground with cooking oil that has been used to cook and fry the food at their stalls,” Jang said. “It’s becoming harder to clean up after them, because we can’t use water to clean up the area when the temperatures drop so low. The water will just freeze up the streets.”

He added, “But we are still very thankful to the citizens who have been helping us clean up after the rallies, with some even taking their trash home as a kind gesture to the workers.

“We will continue to keep the city clean through the bad and the good.”