The fall of Korean conservatism

The fall of Korean conservatism 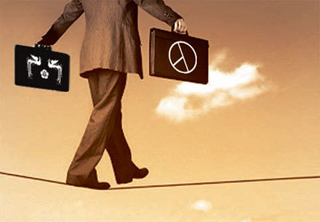 The upcoming presidential election is shaping up to be a competition between two candidates of the Democratic Party rather than a showdown between a conservative and liberal.

As Moon Jae-in and An Hee-jung — DP contenders — are stealing the show in the opposition party, some supporters of President Park Geun-hye say they should participate in the DP’s primary.

Now, the situation has reversed. Liberal candidates are the mainstay of the presidential election, and a majority of voters are very curious about whether South Chungcheong Gov. An Hee-jung can outdo Moon, who has already been dubbed the possible winner of the election.

Some conservatives say they would vote for An so that Moon, the former chairman of the DP, can be eliminated. It seems An is aware of such voters. He tries to distance himself from his public image as a liberal, pro-Roh politician.

Moon is enjoying high approval ratings, but he is still not widely accepted by a majority of voters. There are people willing to vote for him not because they feel attracted to him but because they want to cast their vote to the one who can change the current government. That means Moon has fewer loyal supporters, who will change their mind if they find another surefire candidate who can win against a conservative.

Supporters of Ahn Cheol-soo, another potential candidate, say An is nothing but a pacemaker. No matter how hard he tries, An won’t be able to win a primary against Moon because Moon still has a solid base in the party. Because of that, Ahn says the election will be between himself and Moon.

But an election isn’t over until all ballots are counted. In the history of Korean elections, the conservative and liberal candidates have each been guaranteed about 40 percent of votes. The rest have been swing votes.

First, a high number of conservative voters remain silent about their decision. These are so-called shy conservatives. They are hugely influenced by the recent impeachment of Park Geun-hye and the scandals involving her long-time confidante Choi Soon-sil.

The major reason for the collapse of conservatism is Choi Soon-sil. The conservative ruling party should reflect on the scandals.

Otherwise, it will be hard to hold the election. By doing so, they can gather up disappointed supporters.

A majority of conservative voters still have not yet decided whom to vote for. They once weighed Ban and then Hwang, and time flew.

Extreme candidates are popular in their primary, but a candidate who can reach wider voters has the advantage in the general.

Some conservative candidates still raise their voices. Do they really want to vote in the upcoming election, or are they trying to protect President Park? They must decide on one of the two: either just venting their anger or preparing for the future of the conservative.