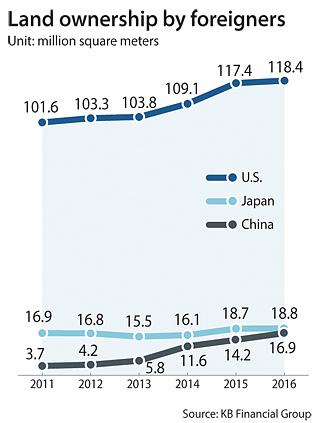 According to the research, the number of properties owned by foreigners jumped 49 percent from 70,781 in 2011 to 105,413 last year. During the same period, the number of those owned by Chinese skyrocketed 486 percent from 3,448 to 20,208. Americans still owned the most amount of the property in the country, however, accounting for about half of the total, or 49,274.

“It appears that Chinese are investing in foreign real estate markets, including Korea’s, as the prices in major cities in China like Shanghai and Beijing are rising fast, while its government also has toughened regulations to reduce the number of speculators,” Kim said.

A researcher at the KB Financial Group suggested that the government and investors need to monitor sales closely since Chinese homebuyers have boosted real estate prices significantly in other countries as well as in Hong Kong and Canada in the past.

In fact, Canada’s British Columbia introduced a 15 percent property transfer tax on foreign real estate buyers in Vancouver to reduce the rising housing costs mainly driven by Chinese in August. Housing prices in Vancouver jumped more than 32 percent from 2015 to 2016.

“Other places like Hong Kong, Singapore and Australia are also toughening their regulations on foreign investors buying properties in their countries, including rising taxes, as their real estate market prices rose significantly,” Kim at KB said. “Their prices rose as such countries introduced various measures to attract more foreign investment, as they were experiencing a slow economy prior to experiencing a price hike. Korea is not seeing the direct impact coming from foreign investors at this point but the number of such foreigners is rising rapidly and it might affect the local real estate market as well later on.”

Even though the increase in foreigners in the country can have the negative impact of causing a bubble in the local real estate market, the research also suggested that it be a good chance for Koreans to invest in the market as demands for rents might also rise from the recent trend.