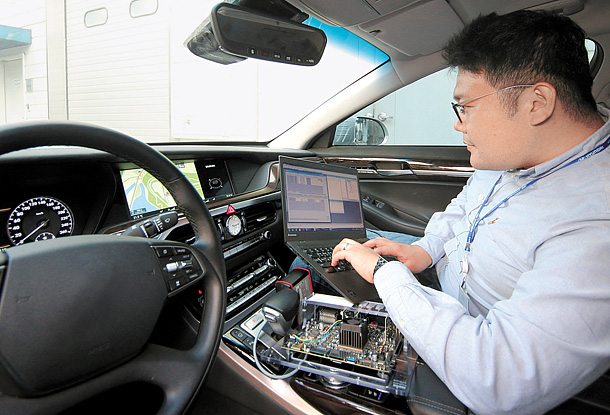 A Hyundai Motor researcher works on the automaker’s connected car technology, one of its key future businesses, in this file photo. The automaker’s new research center will focus on short-term development of new tech businesses. [HYUNDAI MOTOR]

Hyundai Motor Group is establishing a research institute devoted to developing cutting-edge technologies such as robotics, artificial intelligence and new materials with aims to build up new growth engines.

The nation’s top automaker said Tuesday that its Strategic Technology Research Institute will add a large number of specialists in various industries to an existing team in its research and development division to pioneer new areas of business. The institute will be based in Uiwang, Gyeonggi.

“Companies are now facing new challenges from the emergence of disruptive innovations. With an increasingly complex environment, Hyundai Motor Group will strive to offer the highest value to our customers with innovative products and services as we evolve into a market shaper,” a Hyundai spokesperson said.

While the company had been operating the Korea Central Research Institute for technology development, the new center will focus more on technologies that can birth new business portfolios in a relatively short period, while the existing center will be devoted to long-term development of core technologies for commercialization.

While the size of the research team has not been decided, the company said the organization under the institute will be enlarged over the years to continuously enhance R&D capabilities.

The institute will operate in two divisions. One will focus on developing innovative technologies and the other will find new opportunities and set up business strategies based on results.

While analysts had shed concerns that the nation’s auto industry is lagging behind global competitors in key technologies such as autonomous driving, Hyundai said it will aggressively invest in technology development to be a leader in market.

Apart from the new research institute, the carmaker also plans to establish a so-called Intelligent Safety Technology Center devoted to the driverless car business. Hyundai said last week it will integrate all resources for autonomous-driving technology development through the center. The move is consistent with the chairman’s message delivered earlier in the year.

“The company will continuously expand its investment in R&D, further develop core technologies such as autonomous driving and lead future change,” Hyundai Motor Group Chairman Chung Mong-koo said in his beginning of the year speech.