‘Nunsense 2’ is figuring it out on the big stage

‘Nunsense 2’ is figuring it out on the big stage 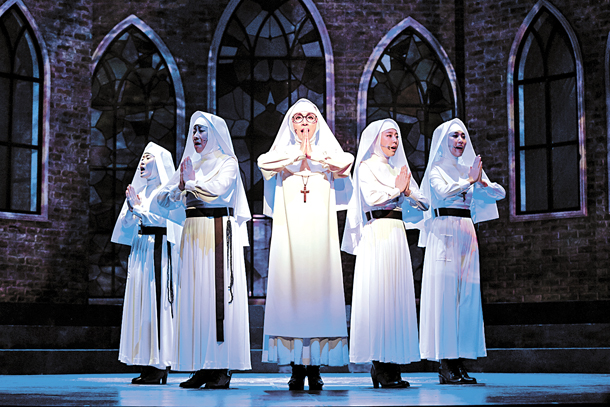 The Korean production of “Nunsense 2,” a sequel to the long-running hit musical “Nunsense,” kicked off its three-week show on Feb. 16 at CJ Towol Theater. [LORGNETTE]

A musical sequel, considering that it’s not common to find follow-ups in the theater, attests to the popularity of the original show. Indeed, the long-running musical “Nunsense” by Dan Doggin was such a mega hit when it debuted in 1985 that the original creator returned with “Nunsense 2” and several more spin-offs.

In Korea, the musical is popular in small theaters across the country and the Korean production of “Nunsense 2” has been touring Korea since 1995.

Perhaps the Korean production team thought that a big fish must swim in deep waters as the musical has gone through a few tweaks to suit larger theaters, most recently at the CJ Towol Theater of the Seoul Arts Center - a space with more than 1,000 seats.

The little jokes and silliness of the Catholic sisters who interact with the audience works well in small theaters, but is a more difficult task when entertaining 1,000 people in the auditorium. Actress Park Hye-mi, who’s been seen not only on small screens but also on musical stages, is directing the musical and proved that her direction works at small theaters in Korea last year. She also starred as Mother Superior Mary Regina. But this time, in bringing the show to a larger stage, it looks like she’s having a hard time juggling two roles at once.

“We had our first show yesterday and things didn’t really go as smoothly as I wanted it to,” said Park during the show’s press conference on Feb. 17. “I wish I could just watch the show and direct from backstage, but being up there performing made it really difficult as a director.”

Moreover, of the eight actresses who alternate playing the five nun characters in the show, only two of them are professional musical actresses while the others work in other professions, making the show look unprofessional. As a fan of comedy, Park says she wanted to cast a comedian, inviting Jo Hye-ryun to make her musical debut. Needing a soulful voice, she included Michelle Lee, a half-Korean, half-African American singer who appeared on the SBS singing audition program K-pop Star. Lee could sing, but her acting on stage was awkward. Others included Park Seul-ki, a TV entertainer, Yewon from girl group Jewelry and Alice from girl group Hello Venus.

“I just wish people can laugh a lot while watching the show … And I am determined to take all the negative criticism,” Park said.

The musical will run until Mar. 5.