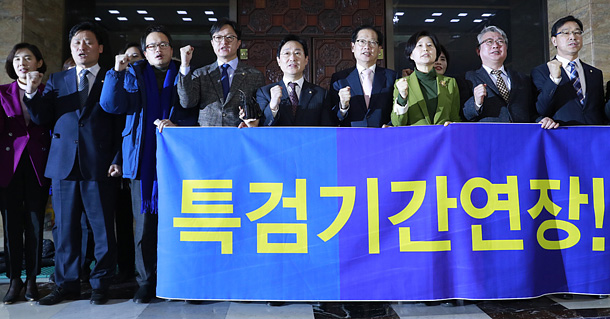 Opposition parties Tuesday urged the acting president to extend an investigation into the political scandal that led to the impeachment of President Park Geun-hye - and threatened to use their majority in the legislature to extend it if he doesn’t.

Heads of the Democratic Party, People’s Party, Bareun Party and Justice Party held a meeting in the morning to discuss the approaching deadline of independent counsel Park Young-soo’s probe into the corruption and abuse of power scandal surrounding Park, her associates and conglomerates. After Park was impeached on Dec. 9, 2016 for alleged constitutional and criminal violations, the independent counsel probe, approved by the National Assembly, was launched on Dec. 21, 2016.

The 70-day investigation is scheduled to end Tuesday, and last week the team asked Prime Minister Hwang Kyo-ahn, who is serving as acting president while Park awaits a verdict in her impeachment trial, to grant a 30-day extension allowed by the law. Hwang has yet to respond.

After a one-hour meeting, Chairwoman Choo Mi-ae of the Democratic Party, Chairman Park Jie-won of the People’s Party, Chairman Choung Byoung-gug of the Bareun Party and Chairwoman Sim Sang-jeong of the Justice Party agreed to pass a revision of the law governing the independent counsel to give the investigators more time. The bill is intended to extend the initial probe period from the current 70 days to 120 days. If the change is made before Tuesday, the investigators will earn an extra 50 days.

“Acting President Hwang must immediately approve the request by the independent counsel to extend the probe,” an agreement issued by the opposition leaders said. “Hwang must clearly announce his decision before the end of today.”

They said that if Hwang fails to make public his position in time, the four parties will do their best to pass the revision at a voting session Thursday.

Together, the four opposition parties control 198 in the 299-member National Assembly. The ruling Liberty Korea Party, which has 94 members, said it disapproves of the change.

The four leaders discussed the possibility of making a request to National Assembly Speaker Chung Sye-kyun to introduce the bill directly to a vote after the ruling party blocked the bill in the Legislation and Judiciary Committee.

Earlier in the morning, the committee held a meeting to discuss the bill, but the negotiations made no progress. While the DP asked Rep. Kweon Seong-dong of the Bareun Party, the committee chairman, to arrange a vote to advance the bill to a main session of the assembly, ruling party lawmakers protested.

Rep. Kweon, then, said Hwang has the authority to extend the independent counsel probe, and it was premature for lawmakers to act before Hwang makes his decision.

“We need the spirit of cooperative politics more than ever,” Kweon said, urging the ruling and opposition leaders to use their political power to negotiate the bill’s fate. The meeting ended after an hour.

Rep. Kim Jin-tae of the LKP, a diehard loyalist of President Park and the ruling party’s chief negotiator in the Legislation and Judiciary Committee, adamantly opposed any attempt to extend the probe. During the committee meeting, Kim claimed the independent counsel has committed many legal violations.

In a party meeting earlier in the morning, Kim also said extending the probe will have an undesirable effect on the impeachment trial of President Park.

“The impeachment trial is ongoing on one side, while an independent counsel is investigating on another side to create a fearful mood,” Kim said. “How can the trial go on properly?”

He also said Park will be arrested immediately by the independent counsel if the probe is extended and the Constitutional Court upholds her impeachment. He urged Hwang to stand up against the opposition lawmakers’ political pressure.