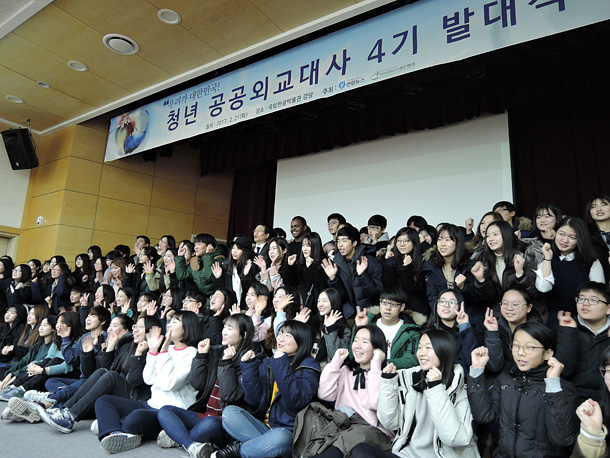 A group of high school and university students selected as public ambassadors for social media activities by VANK, a nongovernmental organization, take a commemorative photo at the National Hangeul Museum in Yongsan District, central Seoul, Tuesday. They will work at promoting the wider international use of the East Sea as the name for the body of water between Korea and Japan. [YONHAP]

Korea’s Ministry of Foreign Affairs released a video encouraging the international use of the name East Sea to describe the body of water between Korea and Japan as the two countries prepare to spar over the issue at an upcoming quinquennial sea-naming conference.

The two countries have struggled over the name of the waters east of the Korean Peninsula, which Tokyo calls the Sea of Japan, a topic expected to be raised at the International Hydrographic Organization (IHO) general assembly to be held in Monaco in late April.

The Foreign Ministry released a 5-minute promotional video, “East Sea, The Name from the Past, of the Present, and for the Future,” simultaneously in Korean and English on Monday evening, sharing it on its official website and also on its Youtube, Facebook and Twitter accounts.

Korea says that East Sea is the oldest name for this body of water, which has been used for over 2,000 years, citing historical documents such as the Chronicles of the Three Kingdoms from 1145 and foreign maps such as the Russian Academy of Sciences’ “World in Two Hemispheres” of 1737 and a British “Map of Marco Polo’s Voyages” dating to 1744, which called it the “Eastern Sea.”

The clip says that the name was put out of use during Japan’s colonization of Korea from 1910-1945, and that Korea was deprived of an opportunity to lobby for the name East Sea in the first edition of the “Limit of Oceans and Seas” in 1929.

Korea calls for the concurrent use of the name East Sea. Tokyo insists on the Sea of Japan moniker, claiming it became recognized internationally in the early 19th century.

But Japanese maps such as the “Simplified Map of Japan’s Periphery” dating from 1809 calls the body of water “Sea of Joseon,” another term for Korea. In the Agreement on Fisheries between Korea and Japan of 1965, when the two countries normalized bilateral relations, each country used East Sea and Sea of Japan in their respective documents.

The UN Secretariat in 2009 also issued a statement that the United Nations has not “authorized” the use of the term Sea of Japan.

“Our government since we became a member state to the United Nations in 1992 has pushed the use of the name East Sea,” a Korean Foreign Ministry official said. Seoul and Pyongyang raised an objection that year on the name of the sea in a UN Conference on the Standardization of Geographical Names.

In 2012, the IHO decided to defer a decision on the name of the sea for five more years amid fierce debate between the two countries.

The upcoming five-day IHO assembly will kick off on April 24 and be attended by over 80 member states.

Korea will push for “East Sea” to be used alongside “Sea of Japan” in the newest edition of the Limits of Oceans and Seas, the standard reference for map production. It currently labels the body of water solely as “Sea of Japan.”

There have been other successful examples of concurrent uses of names in the IHO, such as the English Channel and La Manche to describe the body of water separating southern England and northern France.

The IHO recommends that if countries with different official languages cannot agree on a common name, both should be accepted.

The East Sea video was produced over the past year through the cooperation of the Northeast Asia History Foundation, Society for East Sea and civilian experts.

It will be released in 10 more languages, including Japanese and Chinese later this month. Spanish, French, Arabic, Russian, Portuguese, Arabic, Italian and Hindi versions will come in the next few months.

“Our government has put effort into spreading the use of the name East Sea through reaching out to foreign governments, international organizations and private publishers of maps and the press,” Cho June-hyuck, the Korean Foreign Ministry spokesman, said in a briefing Tuesday. “This video was produced as an extension of such efforts, and we plan to continue to actively work toward improving the use of East Sea.”

The Korean Foreign Ministry released a similar promotional video on the Dokdo islets in the East Sea, called Takeshima by Japan, in January 2014, and later released it in English and Japanese as well. This came as Tokyo upped its global campaign over its territorial claims in recent years.