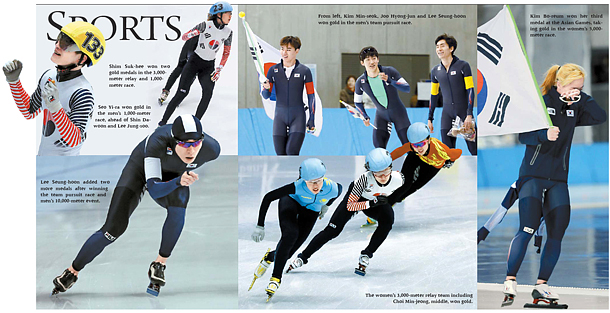 Korea had another field day in speed skating at the Asian Winter Games in Sapporo, Japan, on Wednesday, as short-track speed skater Shim Suk-hee redeemed herself from a trip-up the previous day to win gold, long-track star Lee Seung-hoon overcame a blistering injury to claim gold and three Korean short-track skaters finished at the top in the 1000-meter event.

By the end of the day, Korea led the medal count with 12 gold, 11 silver and 13 bronze medals, bouncing back from a brief stint in second the previous day.

Korea once again demonstrated its dominance in short-track speed skating, adding three more gold medals to its count. The country now has five golds in the sport in this year’s Games.

In women’s short-track, Shim Suk-hee, who has been struggling to medal, won two golds on Wednesday in the 1,000-meter race and 3,000-meter relay at the Makomanai Indoor Skating Rink. It was a stunning rebound from several setbacks she suffered in the previous few days. 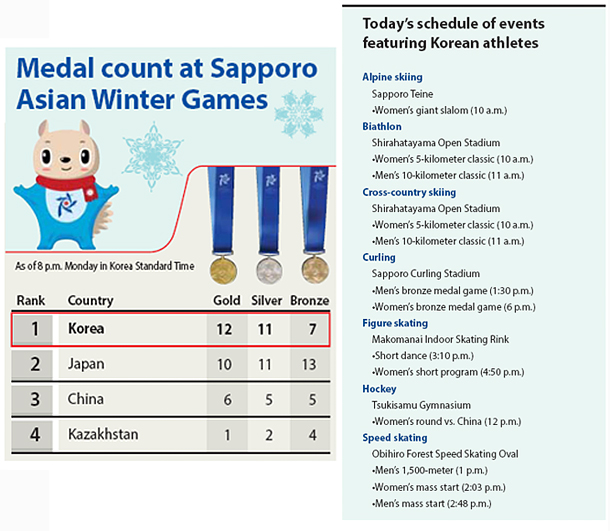 On Monday, she just missed gold in the 1,500-meter race, overtaken by her compatriot Choi Min-jeong, who ended up topping the event.

Then on Tuesday, Shim was disqualified from the 500-meter race when Fan Kexin of China grabbed Shim’s right leg at the corner in her final lap.

Although both Fan and Shim got to the finish line in second and third place, both were disqualified because the referee claimed the two skaters fouled in their physical contact. As a result, Ayuko Ito of Japan, the fourth-place finisher in Final A, moved up to silver and her Korean rival Choi, first-place finisher in Final B, took home bronze.

After the race, the two put their individual competition aside and helped Korea add another gold medal, teaming up with No Do-hee and Kim Ji-yoo in women’s short-track relay. The team finished the race in 4:10.515, 0.465 seconds ahead of China.

With that, Shim has two gold medals and Choi two golds and one bronze from the Asian Games. In total, Korea has won three out of four medals in women’s short-track speed skating.

In men’s speed skating, Koreans swept the top three spots in the 1,000-meter race, with Seo Yi-ra winning gold and Shin Da-woon settling for silver. Seo finished the race in 1:24.0.97, 0.022 seconds ahead of his teammate Shin.

Even though another Korean, Lee Jung-su, finished the race in third, he was not allowed to receive a bronze medal due to an Asian Games policy against one country sweeping the podium in an event. Thus, bronze actually went to fourth-place finisher Keita Watanabe of Japan.

Long-track skater Lee Seung-hoon, who has been recovering from a bad injury sustained earlier this month, won gold in two events - 10,000-meter and men’s team pursuit - on Wednesday, adding to the gold he won on Monday in the 5,000-meter race.

On Feb. 10, at the International Skating Union World Single Distances Speed Skating Championships in Gangwon, Lee sustained a cut on his right calf after he lost balance while turning a corner in team pursuit.

Nonetheless, he’s managed to win three out of the four events in which he is competing at the Asian Games.

Lee finished the 10,000-meter, 25-lap race on Wednesday in 13:18.56, 3.19 seconds ahead of Ryosuke Tsuchiya of Japan. He now has one more race ahead of him, the men’s mass start today, and could potentially take home four gold medals from this year’s Asian Games.

After his 10,000-meter race, Lee participated in men’s team pursuit with Joo Hyong-jun and Kim Min-seok and finished the race in 3:44.32, 1.61 seconds ahead of Japan, giving Korea another gold medal.

Kim is scheduled to race in the women’s mass start today, giving her another opportunity to potentially score gold.

The ice rink wasn’t the only place where Korea medaled. In men’s alpine skiing, Kim Hyeon-tae won silver after finishing his race with a combined time of 2:19.37.

The men’s hockey team, though, fell to Kazakhstan 4-0, and the men’s curling team lost its semifinal match to Japan 6-5.