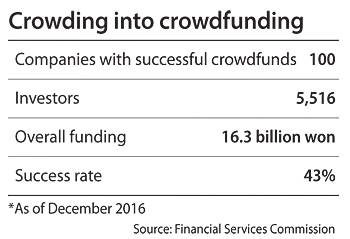 The Financial Services Commission, the country’s financial regulator, on Wednesday revised regulations for equity purchased through crowdfunds to allow investors to sell their shares immediately after purchasing them.

Previously, investors of equity crowdfunds had to wait one year before they could sell their securities.

The revised regulations, set to go into effect in April, are part of the Financial Services Commission’s efforts to boost the new type of funding, which attracted over 16 billion won ($14 million) at the end of 2016.

The securities can be traded on the Korea Exchange’s Korea Startup Market, an online marketplace where shares of early-stage start-ups can be sold.

The regulator also lowered the bar for what it deems a professional investor exempt from investment limits, a move that will go into effect today.

Previously, the government only recognized professional investors as those who placed more than 100 million won into a start-up in the past two years. Those who have made more than two investments of a combined 40 million won also fell into that category.

To increase access to crowdfunding, the Financial Services Commission will allow those holding finance-related certificates to have a higher annual investment limit of 20 million won. Along with the certificates, including a CFA and FRM, the person must have worked at a financial institution registered with the Korea Financial Investment Association for more than three years. Investors who earn less than 100 million won annually can put in up to 5 million won.

Some participants of crowdfunds see the regulator’s limits as too strict, but the agency says there are many risks involved. “Investors should be aware that early-stage investments may have very high risks, and people should sift through company information before making an investment decision,” a source at the Financial Services Commission said.

Equity crowdfunding has gained speed as smaller companies see it as a fresh way of raising capital. The number of companies that offered crowdfunding and succeeded in reaching their target investment reached 100 in December. Aggregate funding stood at 16.3 billion won.