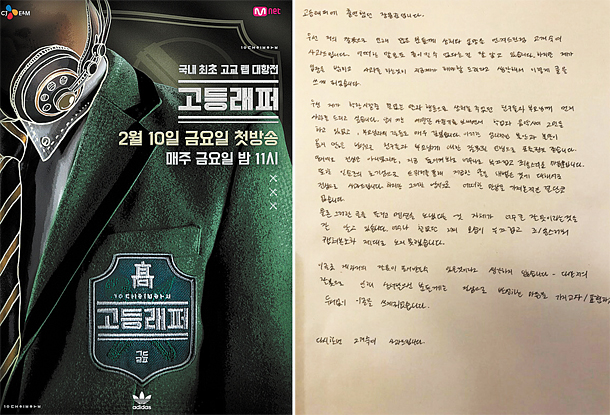 Only having released its second episode of the series, “High School Rapper,” the new hip-hop audition program aired on Mnet has been embroiled in another high-profile controversy.

After the first episode, the focus was on contestant Jang Yong-joon, as he impressed the judges of the program with his rapping skills and good looks. However, online searches out of innocent interest, revealed more than what was expected. Screenshots of past posts on his social media began to surface, with allegations of underage smoking, drinking and bullying as well. One of the biggest criticisms he faced was due to possibly soliciting prostitution, after netizens discovered his Twitter page.

His father, Jang Je-won coincidentally a spokesperson for the Bareun Party, ultimately stepped down from his position due to the controversy, while Mnet revealed a hand-written letter detailing Jang Yong-joon’s intentions to leave the show altogether.

Only days after this occurrence, another student rapper, Yang Hong-won, caught the headlines.

Previous photos of Yang in a karaoke room with a table littered with cigarettes and beer were leaked, as well as accounts of Yang being a school bully.

Mnet has stated that Yang had apologized sincerely, but will not quit the show.

Much of the blame is put on the genre itself. Hip-hop is infamously labeled as a music genre promoting violence, advocating the use of drugs and alcohol as well as featuring the excessive use of curse words. This to an extent is true. However, those accusations were reasonable only until the mid-2000s. As hip-hop reached a wider audience, and currently is a mainstay on the mainstream charts, the genre has matured.

This year’s Grammy Awards saw Chance the Rapper, a rapper with his songs described as gospel hip-hop, receive three awards. In Korea, the hottest hip-hop artists are Dok2, BewhY and C Jamm. The latter two are known to lead healthy lifestyles as Christians, while Dok2 is known for not drinking or smoking. The fact that the artists mentioned above are viewed as role models by adolescents, proves that controversy is only a problem of the individual, not the hip-hop genre as a whole.

Mnet is now in the position to give an explanation for not being able to filter applicants to their shows, and needs to take the blame for giving hip-hop a bad reputation just when it was on the path to forging a positive one.