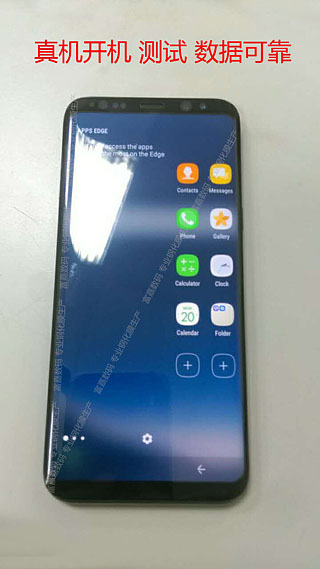 A picture alleged to be of the Galaxy S8 flagship smartphone from Samsung Electronics uploaded on Twitter Tuesday. [UNIVERSEICE/TWITTER]

An unauthorized image of Samsung Electronics’ Galaxy S8 smartphone is spreading online, ramping up excitement over the release of the company’s next flagship model.

A particularly sharp spotlight is on the S8 due to the fact that it is the first major mobile device from Samsung since the Galaxy Note7, which had to be recalled and canceled because of technical glitches that caused it to catch fire.

The S8 is expected to be unveiled in New York on March 29, and the phone will officially be available in the U.S. market from April 21.

Until then, rumors and a leaked image are keeping fans busy.

The phone in the image was powered on and showed details of the main screen.

The app icons were arranged in five rows, with five icons per row. The screen accounts for almost all of the front of the device and its home key was moved on-screen.

The picture spread quickly. Then about four hours later the source of the picture apologized for a wrong title for the photo and said, “This is just edited picture of S8 protective glass! But this gives idea of what S8 will look like.”

Another batch of pictures had been uploaded the previous day through a different twitter account, Universelce, with an explanation reading, “China protective film manufacturers exposure Galaxy S8.”

Android Police, dedicated to providing news, rumors, leaks, applications and tutorials related to the Android platform, reported Wednesday that it found three drawn illustrations of the Galaxy S8 in software of the Galaxy Tab S3, which has yet to be released.

“It’s unclear why the images of the phone exist in Samsung’s tablet but it may have something to do with functions whereby the two devices sync data or work together,” Android Police wrote.

The illustrations show a fingerprint scanner on the rear of the phone and on-screen navigation keys. The scanner was located to the side of the camera flash near the top of the phone.

The last illustration showed a so-called DeX dock. DeX is short for desktop experience, where a dock is used to connect the S8 phone with PC monitors and television screens.

According to the illustration, the docks are connected to monitors through an HDMI connector.