Lotte Group announced new executives for its retail and service subsidiaries after its board meeting on Wednesday. 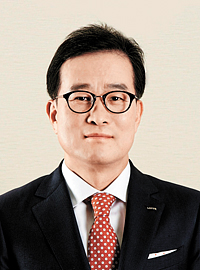 Kang Hee-tae, who was a vice president of Lotte Department Store, has been named CEO and president, succeeding Lee. Kang was in charge of the department affiliate’s China business.

The business unit is a new system implemented by Lotte Group this year that simplifies Lotte’s 90 or so affiliates into four segments: food, chemical, retail and hotel. Its initiative is to develop a common strategy among affiliates that engage in similar industries.

The announcement made Wednesday is a crucial move for Lotte since its retail unit is one of its main businesses. In addition to Lotte Department Store, the retail business also includes Hi-Mart, Lotte.com, Lotte Homeshopping and 7 Eleven.

The 61-year-old Lee started his career at Lotte Department Store in 1981 and served as the head for Lotte Duty Free for two years before he took the helm at the department store.

Kang’s appointment to the department store’s head reaffirms Lotte’s intention to strengthen its stance among Chinese consumers. His wide range of field experience, particularly in women’s fashion and goods, is also said to have worked favorably for his promotion.

Lotte said the head of the newly created Compliance Committee hasn’t been decided, but is still looking in thoroughly into Korea’s legal circles. Compliance Committee is the essence of group chairman Shin Dong-bin’s commitment to clean governance. Its obligation is to overlook every subsidiary to check if their operations follow the law.

The new head of hotel business unit will be announced today after the final round of board meetings.