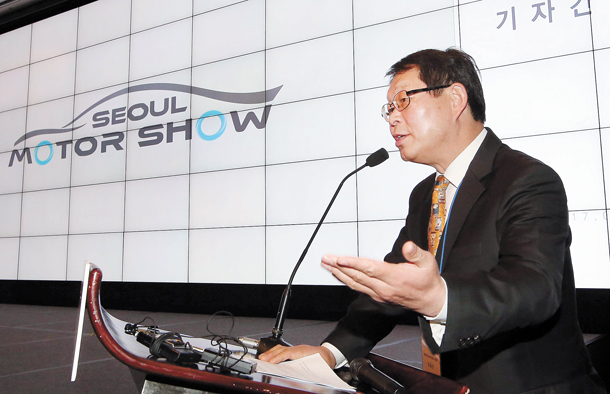 From cutting-edge car technology to the latest models, this year’s Seoul Motor Show will offer a rare glimpse at the latest trends in Korea’s vibrant auto industry.

The biennial event, which runs for 10 days in the first week of April, is one of the biggest trade shows in Korea in terms of participating companies and visitors.

Under the slogan “Design the future, Enjoy the moment,” this year’s Seoul Motor Show will take place at Kintex in Ilsan, Gyeonggi, from March 31 to April 9.

“This year’s Seoul Motor Show will present auto-related information on the current and future auto industry,” said Kim Yong-geun, president of the motor show’s organizing committee. “The event will become a very enjoyable venue for family visitors to come by during the weekend.”

Twenty-seven automakers will be participating, including nine from Korea and 18 from abroad.

Hyundai Motor and SsangYong Motor will each unveil a world-premiere model at the event. Seventeen cars will have their Asian premiere, three of which will be concept cars, including Kia Motors’ much-hyped Stinger sports sedan.

Thirteen vehicles, including Renault Samsung Motors’ subcompact Clio, will have their Korean premiere.

Following the trend of many car and IT exhibitions, the Seoul Motor Show will focus on future car technology represented by autonomous driving technology and eco-friendly cars.

Naver, operator of Korea’s most popular search engine, will participate in the auto show for the first time. It pledged to unveil its latest self-driving car and demonstrate how it collects required data to run a car on the road.

A research team at Seoul National University, said to be working on a self-driving car under the project name SNUber, is going to offer a test-drive session of the car on a 4-kilometer (2.5-mile) route around Kintex.

“Seoul National University has worked for a long time collecting road data around Kintex,” Kim Yong-geun said. “Other carmakers including Hyundai Motor and Mercedes-Benz will demonstrate their technology at their booths.”

A total of 51 auto parts makers, including Hyundai Mobis and Mando, are poised to take part at the motor show.

Compared to the 2015 Seoul Motor Show, the number of participants has gone down, from 32 to 27, while the number of displayed models has also decreased to 300 from 370.

Audi Volkswagen Korea will be absent from the show, still dealing with its diesel emissions scandal.

Ford, Lamborghini and Bentley will also not be present at the show.

Global automakers decide on their participation in auto shows based on the host country’s market size and consumer trends. If the market is considered minor or if consumer preference does not line up with the brand’s identity, they don’t make an appearance, which can eat up a large sum in marketing costs.

Volvo Cars Group will also not appear in the show. A Seoul Motor Show official explained that its headquarters’ policy is to participate in only one motor show per continent. This year, Volvo decided to participate in the Shanghai Auto Show.

Two of the world’s top electric car makers, Tesla and BYD, both of which are expected to debut their models in Korea this year, were absent from the list as well.

Meanwhile, Hyundai Motor and its luxury line Genesis will participate as separate brands for the first time.

With the rising popularity of high-end import models, Mercedes-Benz and the higher-performance division AMG have followed suit to participate independently.