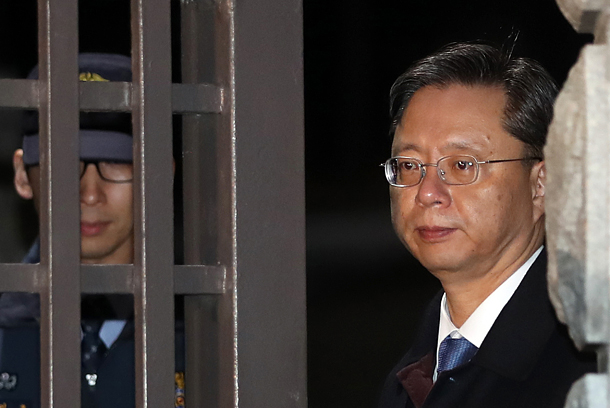 Woo denied all charges against him, claiming that he was merely carrying out orders from President Park, who was impeached last December over a separate but related abuse of power and influence-peddling scandal. “If you work in the Blue House, you will know,” Woo was quoted as saying at the hearing by an independent counsel team member. “There, the president is the law.”

He also reiterated that he has no connection to Choi Soon-sil, a controversial friend of Park currently on trial for bribery in situations connected with the president.

The independent counsel wanted to detain Woo and investigate him further on charges of abuse of power, dereliction of duty, violation of the special inspector law and perjury at the National Assembly. They made the warrant request on Sunday after questioning Woo for 15 hours on Saturday.

Judge Oh Min-seok of the Seoul Central District Court rejected the request, saying investigators failed to present sufficient grounds to back the abuse of power charges. Assistant independent counsel Lee Kyu-chul, during a briefing on Monday, said the abuse of power allegations are key among the four charges.

The independent counsel argued that Woo had abused his power to intervene in demotions of public servants who resisted Blue House orders, particularly in the Ministry of Culture, Sports and Tourism and Fair Trade Commission.

After Kim Jae-jung, a director-general of the commission, refused the Blue House’s order to launch an investigation targeting CJ E&M, Kim was pressured to retire from the civil service, investigators suspected. During the investigation, the independent counsel team obtained testimony from Fair Trade Commission Vice Chairman Shin Young-son that Woo made such an order in 2014.

Investigators also suspected that Woo, as civil affairs senior secretary, turned a blind eye to the influence Park gave to Choi in state affairs. Although Woo insisted that he did not know Choi, investigators obtained testimony that Choi gave orders to Kim Ki-choon, presidential chief of staff from August 2013 till February 2015, and the orders were relayed to Woo.

Woo was also accused of having interfered in a special inspector’s investigation. Lee Seok-so, a former special inspector, told the independent counsel that he was looking into suspicious fundraising activities at the Mi-R Foundation last April, and Woo pressured him to stop the probe, citing orders from Kim and Choi.

The court, however, said the evidence and testimonies provided by the independent counsel were not enough to prove Woo’s charges.

The independent counsel said it will try to gather more evidence. “If we were able to raid the Blue House as planned, it would have been helpful to prove Woo’s charges,” assistant independent counsel Lee said Wednesday. “We will continue with additional investigations to bolster the charges.

While Woo dodged detention, his testimony in the warrant hearing will work against Park, as he blamed the president for all the charges against him.

The court’s rejection of the detention warrant also fueled the four opposition parties’ plan to allow the independent counsel team more time, as it approaches a Tuesday deadline. While pressuring Prime Minister Hwang Kyo-ahn, who is acting president, to allow a 30-day extension, they are also pushing to revise the law governing the independent counsel in order to extend the investigation period from the current 70 days to 120 days. The extension, if passed, will give the team until mid-April to continue the probe.

Hwang has yet to respond to the extension request, and the four opposition parties, which together control nearly two thirds of the legislature, said they want the bill to be voted on today. They urged National Assembly Speaker Chung Sye-kyun to introduce the bill directly to sidestep ruling party resistance, saying that the current situation amounts to a national emergency. Chung is allowed to use his power to arrange a vote in an emergency.