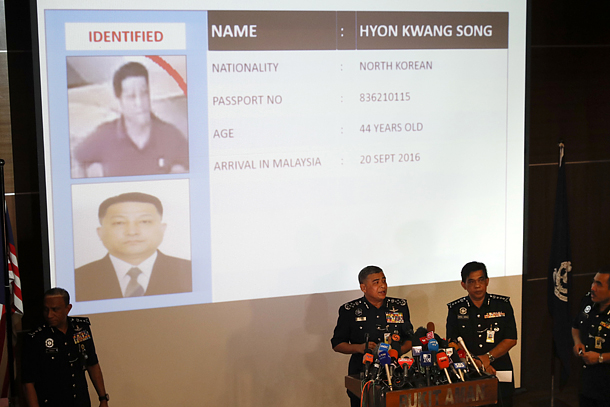 KUALA LUMPUR, Malaysia - A second secretary at the North Korean Embassy in Malaysia is the latest suspect sought in the assassination of Kim Jong-nam, Malaysian police said Wednesday, the strongest hint yet that the communist regime masterminded the plot to kill North Korean leader Kim Jong-un’s half brother.

In their second press briefing since Kim Jong-nam was killed at Kuala Lumpur International Airport on the morning of Feb. 13, police said they were searching for a 44-year-old North Korean diplomat named Hyon Kwang-song, who arrived in Malaysia on Sept. 20, 2016.

Malaysian police have yet to specifically state that the North Korean government was behind the killing, saying only that it was “clear” North Korean nationals were involved. Nor did authorities explain what role the diplomat played in the murder, or what he did at the embassy.

Another new suspect being sought Wednesday was 37-year-old Kim Uk-il, an employee at Air Koryo, North Korea’s state-owned airline. Having strong proof that both are still in Malaysia, police said they asked the North Korean Embassy to hand them over.

Should the embassy resist, Malaysian authorities said they would issue arrest warrants for the duo.

A third wanted suspect still in Malaysia is a 30-year-old North Korean man named Ri Ji-u, who was first mentioned last Sunday. Ri’s occupation is not known. Police are still digging into his background.

On the four other North Korean suspects who were identified in the first press briefing Sunday, police said they “strongly believed” they’ve gone back to Pyongyang, North Korea’s capital.

Eight North Koreans and two foreigners - an Indonesian and a Vietnamese - have been identified as suspects so far, bringing the total number of suspects to 10.

Four arrests have been made, including one North Korean: 47-year-old Ri Jong-chol, who arrived in Malaysia on Aug. 6 and was supposed to be working for an herbal medicine company in the capital of Kuala Lumpur, but apparently was not.

The Indonesian and Vietnamese suspects have also been apprehended, as well as a Malaysian man who isn’t a suspect in the case but was arrested to help police with investigations. He is known to be the Indonesian suspect’s boyfriend.

The North Korean Embassy in Malaysia has yet to render any help in the probe, police said.

Autopsy results on Kim Jong-nam weren’t revealed Wednesday. In their first press conference Tuesday, officials at the Hospital Kuala Lumpur, which performed the post-mortem, said they still don’t know what exactly caused his death and that they were waiting for lab reports to come from the government’s chemistry department.

A timeline on when the results would be released was not given; the hospital said there were no signs Kim died of a heart attack. As for the Indonesian and Vietnamese women who carried out the attack on Kim, Malaysia’s police chief expressed certainty that they meant to kill him.

“We’re ruling out the possibility that the women thought the attack was a prank or even that they believed they were shooting a television show,” Khalid Abu Bakar was quoted by The Star, a news outlet in Malaysia, as saying.

“The lady was moving away with her hands toward the bathroom,” said Khalid, according to The New Straits Times, another Malaysian newspaper. “She was very aware that it was toxic and that she needed to wash her hands.”

Khalid was referring to Doan Thi Huong, the 29-year-old Vietnamese woman who was seen in airport CCTV footage on the day of the crime wearing a white T-shirt with “LOL” emblazoned on the front.

It is suspected that she and the 25-year-old Indonesian suspect, Siti Aisyah, were instructed by the other North Korean suspects to wash their hands after the attack.

Khalid, inspector-general of the Malaysian police who led Wednesday’s press conference, denied rumors that Kim Jong-nam’s eldest son Kim Han-sol arrived in Kuala Lumpur Monday evening to claim his father’s body and provide samples for a DNA test. Nobody from his family has contacted Malaysian authorities yet, he said.

The police chief offered protection to any relative of Kim if they arrive in the country. Malaysia has called for a family member to come forward for a DNA test, a prerequisite for them to confirm the identity and release the body.

Malaysian police have yet to officially confirm that the dead man is Kim Jong-nam because of that loophole, referring him instead as Kim Chol, the alias he used in a fake passport.

The couple also have a daughter named Kim Sol-hui, who is younger than Kim Han-sol. The family lives in Macau.

Kim Jong-nam’s first wife and daughter reportedly live in Beijing. South Korea’s National Intelligence Service said last week that both families were under the protection of the Chinese government.

When a correspondent from the JoongAng Ilbo, an affiliate of the Korea JoongAng Daily, arrived at a 20-floor building in downtown Kuala Lumpur that housed the Kuala Lumpur branch of North Korea’s Air Koryo Wednesday afternoon, he was blocked from entering and told by an office worker that the airline had recently moved.

The last time Air Koryo workers came to the building was last Friday, according to the source.