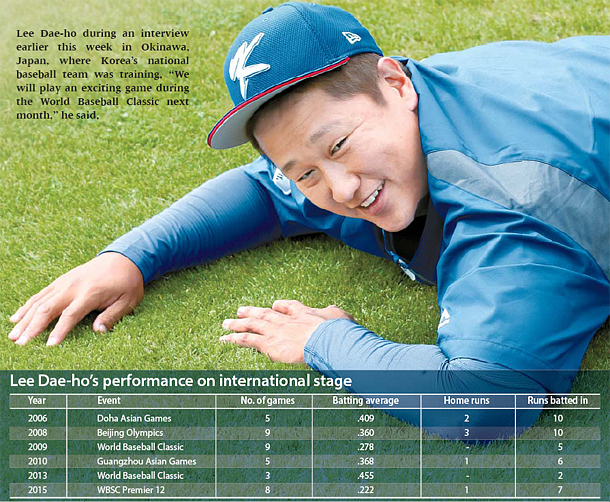 With the World Baseball Classic less than two weeks away, the Korean national team returned from training in Japan on Thursday and will play its first round of practice matches today.

The international competition is expected to be fierce, and the team is banking on a secret weapon: power slugger Lee Dae-ho, who belatedly joined his compatriots in Okinawa for training last Friday. Lee was the final arrival, having just come off spring training in Arizona with his regular team, the Lotte Giants of the Korea Baseball Organization.

Lee recently returned to the Korean league after a five-year stint in Japan and the United States. But even while he was abroad, he always managed to come back to play for the national team. Lee has represented Korea in every international competition since the 2006 Doha Asian Games except the 2014 Incheon Asian Games.

Most recently, he helped the team win the 2015 Premier 12 tournament, fighting through a hand injury during a semifinal match against Japan.

“It’s an honor to be part of the Korean team,” Lee said in Okinawa on Tuesday.

Known affectionately by fans as “big boy” for his powerful swing, Lee will likely be the team’s cleanup hitter, with Kim Tae-gyun of the Hanhwa Eagles as the third hitter and Choi Hyung-woo of the Kia Tigers as the fifth.

“The hitters may change depending on their condition, but my trust in Lee’s ability will never change,” said Kim In-sik, manager of the Korean baseball team, on Tuesday in Okinawa.

In international events, Lee has a batting average of 0.336 with seven home runs and 40 runs batted in.

Japan will most likely play Korea in the second round of the Classic, and if its past experience with Lee in the Premier 12 is any proof, it has a lot to fear from the big boy’s offensive skill.

“Just like how Korea was able to produce good results at the Classic from its past leaders Lee Jong-bum and Lee Seung-yuop, they have Lee Dae-ho now,” Daily Sports Japan wrote in its analysis of the upcoming Classic.

As part of its training in Okinawa, the Korean team played two exhibition games: one against Nippon Professional Baseball’s Yomiuri Giants on Sunday and the Yokohama DeNa BayStars on Wednesday.

“I always tell younger players not to be stressed about the result,” Lee said. “The result of the game is us veteran players’ responsibility. I want them to just enjoy the game.”

With the World Baseball Classic starting before the Korean season, there’s little time for Lee to shift from training mode to competition mode.

“I’ll have to get used to the fast balls through practice matches and be ready by the actual tournament,” Lee said.

Korea’s first game will be against Israel at the Gocheok Sky Dome in Seoul on March 6.