Korea finished strong in men’s long-track speed skating on the fifth day of the Asian Winter Games in Sapporo, Japan, on Thursday, as 17-year-old Kim Min-seok clinched his second gold medal and Lee Seung-hoon his fourth in the regional event.

But perhaps no one was more elated than the women’s ice hockey team, which scored its first win against China in its 19-year history.

Despite the success, Korea failed to maintain its top spot in the medal rank, dropping down to second with 14 gold, 12 silver and 10 bronze medals.

The wunderkind Kim especially proved reliable for Team Korea. Just a day after helping the men’s team win the pursuit race, he won his second gold medal in this year’s Games with a brisk 1:46.26 finish in the men’s 1,500-meter race. Not only was he good for gold, he managed to set a new Asian record. 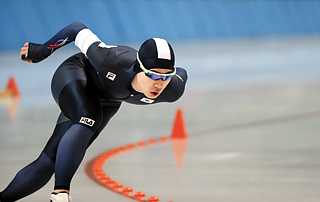 Lee Seung-hoon won a gold medal in the men’s mass start race at the Asian Winter Games in Sapporo, Japan, on Thursday. It is his fourth at the Games. [YONHAP]

Later that day, he won bronze in the men’s mass start race.

Kim has been an elite skater ever since he joined the national team as its youngest member, at age 15, in 2014. That year, he won four events at the National Winter Sports Festival and quickly became a player to watch.

Following his win, Kim’s compatriot from the team pursuit race, Lee Seung-hoon, won his fourth gold medal in the men’s mass start race by finishing his race in 8:12.72. With it, Lee has swept all four of his events, becoming the first Korean to win four medals, all gold no less, at the Asian Winter Games.

Cumulatively, Lee has also won the most gold medals among Koreans at the Games, with a total of seven (he won three at the 2011 event in Kazakhstan).

The women’s curling team continued strong, winning a semifinal match against Kazakhstan 15-3. The team, led by Kim Eun-jung, will be vying for gold against China today.

Men’s curling, on the other hand, settled for bronze. After losing its semifinal match to Japan 6-5, the team bested Taiwan 10-5 to clinch the third-place spot. This is the third straight Asian Winter Games in which the men’s team is standing on the podium.

In cross-country skiing, Kim Magnus, a gold medalist in the men’s 1.4-kilometer sprint classic, won silver in the men’s 10-kilometer race, finishing in 25:32.5, 16.9 seconds behind Akira Lenting of Japan.

But perhaps no achievement was greater on Thursday than the one made by the Korean women’s ice hockey team, which has struggled in its 19-year history to even win matches. It scored its second win ever on Thursday, when it topped China 3-2 in a shootout.

That puts Korea’s record against China at one win and seven losses. In previous matches, Korea lost to its giant neighbor 20-0 in 2007 and 10-0 in 2011. The hockey team’s win, though, was not enough for it to medal because it had to beat China by how three points.

However, the team’s performance at the Asian Games shows their potential as they begin preparing for the Winter Olympics next year. Because Korea is hosting, the team has a spot guaranteed in the Olympics.

The women’s hockey team will play its final round in the Asian Games against Hong Kong on Saturday.