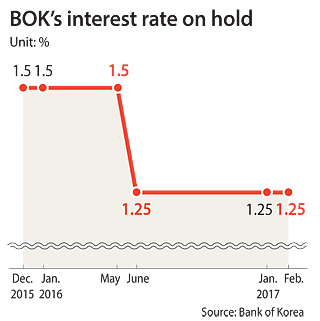 The Bank of Korea held its key rate for an eighth straight month on Thursday as a combination of snowballing household debt, uncertainties surrounding U.S. economic policies and the domestic political scandal prompted the central bank to maintain its wait-and-see approach.

Governor Lee Ju-yeol said the decision to freeze the rate at a record low of 1.25 percent was unanimous, a move that was in line with market expectations.

The Bank of Korea “decided to hold the base interest rate with the prospect that Korea will keep on maintaining moderate growth and the inflation rate moving in the 2 percent range which is the bank’s inflation target.”

Analysts said the central bank may press the hold button for an extended period since raising and lowering the rate both have drawbacks to managing the country’s surging debt.

“In terms of household debt and its relation to the key rate, much of the loans in Korea are based on a floating rate, meaning they are susceptible to the changes of the key rate,” said Gweon Hee-jin, a researcher from Hanwha Investment and Securities.

“If the key rate goes up, then interest rates on the loans will follow, adding burdens to the public. But if the BOK reduced the rate, then it could lead to further rise in household debt, which is already at its record high, so that is not an option either.”

Gweon projected that the central bank will freeze the rate throughout the year, adding that there is a possibility of a rate increase next year.

Korea’s household debt reached another high in the fourth quarter.

Outstanding household debt, which includes loans from banks and other financial institutions as well as credit card spending, stood at 1,344 trillion won ($1.17 trillion) as of December, a rise of 3.7 percent from the previous quarter.

“Entering this year, there have been multiple factors to push up interest rates,” Lee said. “We should pay attention to low-credit borrowers who carry sizable debts from multiple lenders.”

The governor also touched on the worry that the U.S. will name Korea a currency manipulator as Donald Trump’s administration vowed to take a tougher approach toward countries deemed to have devaluated their currencies to gain a competitive advantage in exports.

“I don’t think there is a large possibility of Korea being designated a currency manipulator by the Treasury,” he said. “The foreign exchange rate should be determined by the market, and authorities may step in when volatility is excessive.”

But he didn’t completely rule out the odds, adding the designation can take place if the U.S. changes its currency monitoring criteria.

As for market concerns that Korea will face an economic crisis in April, Lee said the worries are exaggerated given that the risks have been anticipated.

Daewoo Shipbuilding & Marine Engineering has 440 billion won debt due in April and analysts believe that the shipyard company may have a hard time fulfilling its obligation.