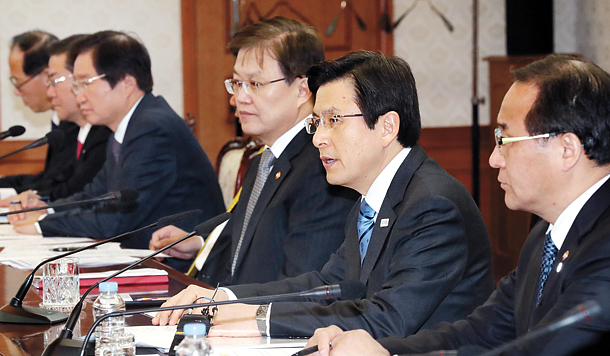 Acting president Hwang Kyo-ahn speaks in a government meeting over boosting the domestic market at the government complex in Seoul on Thursday. [YONHAP

On Fridays, most office workers can’t wait until the hand on the clock ticks down to the last few minutes. And who could resist if they are told that they can get off work early, kicking off a relaxing and exciting weekend?

The Korean government on Thursday announced a plan to adopt a system that allows office workers to get off work at 4 p.m. Friday. In exchange, the workers will extend their working hours by 30 minutes from Monday to Thursday.

The government expects the extra leisure time on the weekend will help boost the domestic economy, including the tourism industry, as people will have more time to travel, shop and dine.

The new working hours are one of the measures that the Korean Ministry of Strategy and Finance unveiled that are targeted at boosting the domestic economy as there have been growing concerns over whether the 2.6 percent annual economic growth projected by the Korean government for this year is possible, as uncertainties in both the local and global market have expanded.

“I have emphasized that the government officials proceed with decisive measures in advance to end the weak domestic consumption [before it worsens further],” said Hwang Kyo-ahn, prime minister and acting president, at a meeting at the Central Government Complex, in central Seoul on Thursday. “We need to have people who can spend money to do so in the local market through various ways. The government will create an environment where more Koreans can enjoy leisure activities while also having more Koreans and foreigners to travel in the country.”

This plan mirrors Japan’s “Premium Friday” that its government and its business lobby group Keidanren designed in the second half of last year to prop up Japan’s sluggish domestic market.

“Koreans work a lot longer than other developed countries and the government’s decision to give one more holiday during last year’s Children’s Day weekend helped domestic consumption to go up significantly,” said an official at the Finance Ministry. “We think the Premium Friday will allow more Koreans to spend time with their family members while working similar hours as well.”

The government designated last May 6, a day after Children’s Day, as a holiday, and said sales at department stores rose 16 percent during the long weekend when compared to the previous year, while people visiting amusement parks or theaters jumped 70 percent in the same period.

The government came up with ways to boost the domestic consumption, as the country’s economy is expected to grow below 1 percent in the first quarter, which is exceedingly lower than the government’s yearly target of 2.6 percent.

“We are currently looking at mid-0 percent growth in the first quarter but we also think it will even be lower than that level as the domestic consumption has weakened further recently,” said Lee Chan-woo, deputy minister for strategy and finance.

In fact, the consumer sentiment index dropped from 102 in October to 94.1 in December. The figure stood at 93.3 last month, the lowest level since March 2009, according to the Bank of Korea. A reading above 100 points indicates the majority of survey participants have a positive outlook on the national economy, while a reading below 100 indicates a negative view.

The government also plans to provide tax cuts of up to 30 percent to hotels and related tourism business that offer more than 10 percent discounts to customers in hopes of encouraging more consumers to travel.

“The lodging industry continues to be weak in the country and such trend will have negative impacts on some 140,000 workers at the industry and regions where there are many number of hotels and condos,” said an official at the Finance Ministry. “We will help the lodging sector’s business owners save 30 percent on their property taxes if they give more than 10 percent discounts to customers. The incentive will last just this year.”

To boost the local travel sector, the government said it will consider giving discounts to travelers using express railways such as KTX if they purchase tickets in advance. The government hasn’t yet confirmed the details.

The government’s plans also include helping sectors affected by the so-called Kim Young-ran Law that went into effect in September.

The Finance Ministry said it is considering lowering the tax rate gap between private and public courses to 500 percent and it will lower golf fees at private courses by more than 50,000 won. The ministry believes that there will be more golfers not only from Korea but also from abroad when prices drop. It said it will finalize plans after consulting with both the public and private sectors.