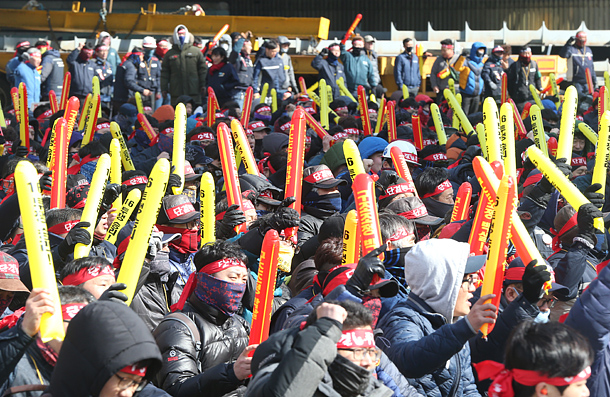 Hyundai Heavy Industries’ labor union members strike at the company’s headquarters in Ulsan on Thursday. The strike lasted for eight hours and others are scheduled for today and Monday. [YONHAP]

The labor union of Hyundai Heavy Industries took to the streets on Thursday, holding a strike for eight hours to protest the company’s decision to split the shipbuilder into four companies.

It was the union’s first full walkout in 23 years.

While the shipbuilder’s management said that only 800 of the 13,000 union members participated in the walkout, a union representative claimed 1,500 took part.

Management proposed splitting the shipbuilder into four companies according to their business as part of its restructuring efforts in November.

Under the plan, the company’s main businesses of shipbuilding and offshore plants would fall under a single company, while construction equipment, electro and electric system and robotics would be spun off.

The company has said that the move is crucial in overcoming the losses it has incurred in recent years.

The company promised that employees’ jobs will remain intact even after non-essential businesses are split. However, the union isn’t buying it.

“Management say that they will guarantee our employment but those promises will only be valid this year since we have to renegotiate with the newly separated companies,” a spokesperson for the union said.

Ulsan’s government is in support of the union, as the spinoff plans include the relocation of the shipbuilder’s spun-off companies to other locations including Seoul, Busan and Daegu. The moves would hurt Ulsan’s economy, which already has been affected by government restructuring.

Shareholders will decide whether to accept management’s proposal during its meeting scheduled for Monday. Analysts speculate that the shareholders will likely accept the offer.

The union also is planning eight-hour strikes today and Monday.

The failed negotiations on wages, which entered its 82nd round on Wednesday, also triggered Thursday’s strike. The company’s management and the union have been negotiating since May but haven’t reached an agreement. Management has recently proposed freezing the base wages at 100 percent of a month’s salary plus 1.5 million won ($1,320) as an incentive.

But the union rejected the incentive as it included employees returning 20 percent of their annual salary for a year. The shipbuilder’s management said they didn’t think the strike would have a major impact.

“The offer we are making is the best we could do, especially as we are asking them to share the burden instead of firing them, because if orders don’t come in, as is the situation today, we might not have a choice,” a company spokesperson said Thursday.