LG steps it up with ultra-thin OLED TV

LG steps it up with ultra-thin OLED TV 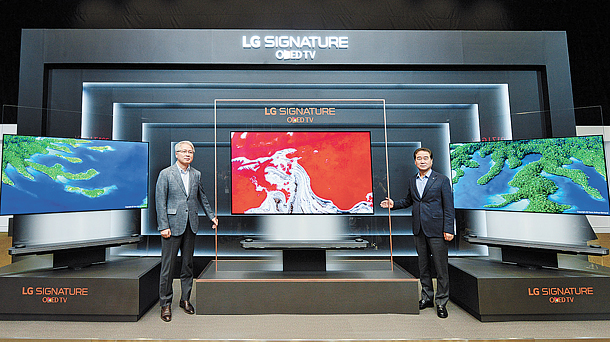 LG Electronics on Thursday unveiled new models in two of its high-end categories - so-called ultra-OLED and super ultra-HD - and said it would pursue both technologies as part of its sales strategy.

Among the different 65-inch ultra-OLED TVs introduced during the launch event on Thursday at LG’s R&D center in Yangjae-dong, southern Seoul, two models - the 65W7 and 65G7 - will go under the company’s “Signature” brand, a high-end line of consumer electronics brand LG debuted last March that boasts technologically advanced functions and refined designs.

The 65G7 is a follow-up to last year’s 65G6, the first TV under the Signature line, and has only minimal design changes. The 65W7, on the other hand, boasts a groundbreaking design made possible by OLED technology that doesn’t require the kind of backlighting and space needed in LCD counterparts.

The company says the W stands for wallpaper, referring to the TV’s new “picture-on-wall” design. The 65W7 is extraordinarily thin, 2.57 millimeters, and weighs only 17 pounds, making it look like part of the wall when it is hung up.

For a minimalist design, other components including speakers and circuits have been removed from the television and put in a separate unit. It is equipped with four regular and two woofer speakers running on the Dolby Atmos system. Two of the regular speakers have been designed with up-firing for multidimensional sound. The unit can be placed on a shelf and connected to the screen through a plug hidden behind the wall.

After launching the world’s first OLED TV in January 2013, LG has long been dedicated to this expensive type of television, and its efforts seem to be paying off.

LG was the world’s top manufacturer of premium TVs costing $2,500 by shipment last year, capturing 43.1 percent of the market, up from 17.5 percent a year earlier, according to market research firm IHS Markit. Samsung, a long-time top TV producer, had its share more than halved over the same period, from 57.7 percent to 20.3 percent, and retreated to third. Sony, in the meantime, surged to second after claiming a 25.2 percent market share.

Kwon Bong-suk, executive vice president and CEO of LG’s home entertainment division, told reporters at the launch event Thursday that this year is set to be a crucial one for LG. Eleven other consumer electronics manufacturers are set to release OLED TVs.

“Our top priority will be solidifying our standing in the premium TV market with OLED technology,” he said. “OLED competition will get fierce as not only Sony and Panasonic but also most high-end European players will be jumping on the bandwagon.”

Over 10 percent of all LG TVs sold last year were OLEDs, and this year is expected to see at least 15 percent as the televisions gain popularity.

To set itself apart from LG, Samsung has opted to apply a different technology, what it calls quantum-dot LED, or QLED, to its televisions. The tech giant claims their display is packed with tiny particles that let any color be expressed at any brightness. But QLED TVs still require backlighting, and those crystals don’t self-emit light in the same way that OLEDs do, experts say.