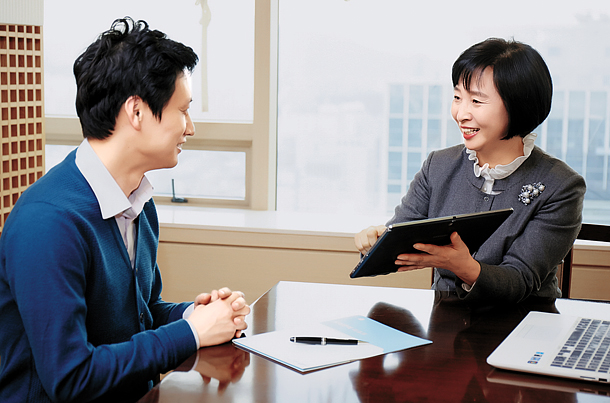 Nine out of 10 insurance planners at Samsung Fire and Marine Insurance say they would recommend their job to others. This was the result of a recent survey conducted by the company on 3,053 of its insurance sellers.

When asked about the specific advantages of the job, the employees pointed to the income (40.7 percent), work-life balance (23.6 percent) and guaranteed employment (23.4 percent). Those in their 20s and 30s with younger children were especially happy about the work-life balance, while those in their 60s appreciated the guaranteed employment because they can maximize their retirement savings.

When asked about the appeal of selling insurance over other products, respondents said that everyone needs insurance (34.3 percent), the job has no startup costs (33.2 percent) and many customers walk away satisfied (18.3 percent). In particular, those in their 40s and 50s appreciated the lack of startup costs, reflecting their concerns about opening their own business.

Samsung F&M’s insurance planners said they feel most proud that their company ranks first in the property insurance industry (33.6 percent), in terms of mobile-based sales (27.8 percent) and in terms of best-structured training system (19.9 percent). Employees said they felt most accomplished when customers referred them to others (46.3 percent), when customers were covered by insurance (33.4 percent) and when their products contributed economically to households (15.3 percent).

Their main clients were families and friends they already knew (40.0 percent), people with referrals from other customers (39.7 percent) and new clients (20.4 percent). Employees with more than three years of experience had roughly equal numbers of clients they already knew and clients who were referred. For those with over 10 years of experience, new clients and referrals filled their lists.

Prior to joining Samsung E&M, 30.3 percent of insurance planners were homemakers, 25.2 percent were self-employed and 25.1 percent came from other companies. Half of respondents said they came to the job after their friends who were working in insurance recommended it. A quarter of respondents found the job on their own.

Contrary to popular belief that insurance sellers are extroverts, six out of 10 respondents said they were introverts. In fact, more than half of employees, 51.2 percent, had fear of sales jobs at the beginning of their career and were anxious about their reputation and finding new customers.

When asked what their key to success was, 47.4 percent answered integrity and 30.1 percent responded with “faithfulness to basics.” They said the best people for this job were diligent workers (47.6 percent) and good listeners (23.9 percent).

Over 70 percent of employees said they want to work into their 70s. They also expressed interest in handing down the job to their children. The insurance planners especially recommend the job for people who would like to work without a set retirement age (42.3 percent), people like working moms who want flexible hours (31.2 percent) and salespeople looking to pitch a different product (18 percent).

“People who work at our company are very satisfied with their jobs, since we support them with a sales system based on mobile and allow their children to succeed them,” said Park Geun-bae, head of recruiting at Samsung F&M. He emphasized that “anyone can work for a lifetime with us.”