Behind the fears that fuel Seoul’s pro-Park rallies

Behind the fears that fuel Seoul’s pro-Park rallies 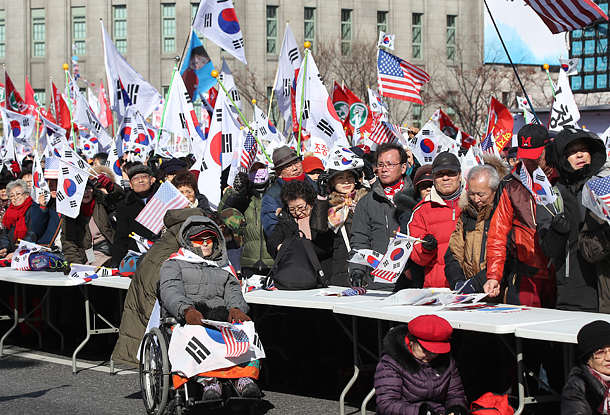 Supporters of President Park Geun-hye attend a weekly rally in front of Seoul City Hall last Saturday waiving Korean and American flags, demanding the Constitutional Court reject an impeachment motion against Park. Many pro-Park members share a fear that the country will fall into the hands of North Korea sympathizers if the president is removed from office. [YONHAP]

Every Saturday night since Oct. 29, thousands of Koreans have poured onto a main artery in central Seoul to demand an end to the presidency of Park Geun-hye. Their numbers peaked at 1.6 million on Dec. 3. Even after Park was impeached in December, the rallies continued on. Candle-carrying protesters didn’t care to wait for a verdict in an impeachment trial. They wanted the president out - now. That was the chant of thousands of people carrying candles every single Saturday.

But just up the street, a group of Koreans supporting President Park have been holding rallies begging for her to stay on as president.

And they are on the pavement every day.

Kim Sung-gil, a former Motorola employee who emigrated to Canada in 1987, had already planned his annual homecoming when he heard about the pro-Park rallies. “I landed in Korea on Feb. 9,” Kim, 76, says. “And I rushed straight to the rally the next day. I was initially planning to just travel in Korea, but I just couldn’t. I had to let my voice be heard.”

The anti-Park rallies have captured the lion’s share of media attention, which is natural because of their greater numbers. The biggest crowd so far for a pro-Park rally has been 40,000 on Feb. 18, according to unofficial police estimates.

“No Korean media tried to explain what made them (pro-Park members) take to the streets before the passage of the impeachment motion (on Dec. 9) because many saw these protesters as a potential threat to the impeachment process,” says Choi Hyun-sook, author of “Birth of the Conservative Silver Generation,” a journalistic exploration of Korea’s gray-haired far-rightists.

The candlelight vigils are fuelled by righteous indignation and disappointment in a president that let many people down.

In contrast, the pro-Park rallies are fuelled by fear.

The fervor of the anti-Park protesters is easy to understand. A scandal that erupted in October seemed to show that Park allowed an inner circle run her government, making senior appointments and blacklisting entertainers they disapproved of. With the help of her friend Choi Soon-sil, Park allegedly strong-armed millions of dollars in donations from business groups to two foundations, allegedly in return for government favors. Choi also got personal favors from companies. Park is also accused of being directly responsible for a botched government response to the sinking of a ferry that killed 304 people.

The charges were serious enough for the president to be impeached. A verdict in her trial is expected by March 13.

The candle light protesters have also been admired for their civility, their habit of bringing small children to the protests to teach them about democratic rights and responsibilities and for courteously cleaning up after themselves.

When a reporter visited the scene at 8:30 p.m. on Feb. 15, a number of tents were occupied. In two, the national anthem was playing on radios. In one of the tents, a man was singing along; in the other someone was accompanying the anthem on a harmonica.

The tents went up on Jan. 21 and it appears they were noticed by the president.

Park’s only interview after her impeachment was passed by the National Assembly on Dec. 9 was aired on online channel Jeong Kyu-jae TV on Jan. 25. In the interview, Park, 65, said her heart “aches” when she sees her supporters in the streets “for the sake of protecting democracy.” She also claimed, in a Donald Trump-like way, that her supporters were “twice as many” as the anti-Park demonstrators. That assertion was not true.

The anti-Park rallies have drawn people from all ages, walks of life and political persuasions, a fact that is stressed by journalists covering them.

The pro-Park rallies are less diverse. Their adherents are advanced in years and many proudly place themselves at the conservative pole of Korea’s long-polarized political spectrum. They are ardently anti-communist, pro-U.S. - they wave a lot of American flags too - and quick to see communist threats to South Korea.

“The people behind the candlelight vigils are seeking to undermine the Korea-U.S. alliance,” says Kim Yu-gyeong, a round-the-clock protester who enjoys keeping the camp tidy.

“It is thanks to the U.S. that I, my daughter and my grandchildren are able to live in a safe environment without having to worry about starving to death,” he says. Kim worries that if Park is removed from office, U.S. forces will be withdrawn from South Korea, which he considers a nightmare scenario.

A feeling shared by many Park supporters is that the scandal that led to Park’s impeachment was a conspiracy to oust her so that pro-North Korea elements could take over the country. They believe the candlelight vigils have been engineered by “commies” and the country is on the verge of falling into the hand of “reds” if the president is removed and a liberal opposition party wins the presidency - which is a real electoral possibility.

“These pro-North elements have made their way into every aspect of this society,” said a Park supporter in his early 40s, which made him one of the youngest in the group. “The threat from the North is real!”

In her Jan. 25 interview, President Park said she believed the candlelight vigils were part of a “conspiracy premeditated from a long time ago,” without giving any elaboration.

Another Park supporter told the Korea JoongAng Daily that he is “in fear” that his own contribution to the so-called miracle on the Han - South Korea’s rise from poverty to become an economic powerhouse - “could be shattered” if the president is ejected from office.

“I have been always proud of that fact that export products I manufactured in my early days enriched the country,” said the 80-year-old Park supporter, who wished to remain anonymous. “I am fearful that the country would be thrown back to the past dark years (of the 60s and 70s) if the impeachment motion is accepted.”

These fears - of losing U.S. support, of anarchy, of slipping back into the past - is natural for the older generation, a “reflection of their going through such tumultuous times in this country,” says author Choi Hyun-sook.

“A majority of people partaking in the Korean flag protests are in their 70s and 80s, who experienced tumultuous times from Japanese colonial rule to a sudden liberation followed by the division between North and South and then a devastating war that left the country in ruins,” says Choi, a political activist who unsuccessfully ran for a national assembly seat in 2012 with the liberal New Progressive Party, predecessor of the Justice Party.

“Through such experiences - the undergoing of tremendous and rapid changes - they began identifying themselves with the state as a single entity.”

Choi says Park’s supporters are accustomed to “putting what they see as the national interest above their own” without recognition of their individual rights as citizens.

“They attribute Korea’s current prosperity to the strong leadership of the military government in the 60s, 70s and the 80s. And they see the Park Geun-hye government as the rightful successor to such strong governments.”

Park supporters are panicking because they fear today’s prosperity could go down the drain if the Park government is removed. Choi cautions against characterizing the elderly protesters as “irrational” or “illogical,” as some media does.

“We need to understand why these elderly people have such fears,” she says, “and find more occasions to communicate with each other instead of just mocking them.”

But for Kim Sung-gil, who has delayed his trip home to Canada to continue his support for the impeached president, none of these analyses really matter. He just wants to see the president back to where Korea needs her: on the job.

“If the impeachment motion is accepted by the court and Park is removed,” he says grimly, “that means the world has turned upside down.”