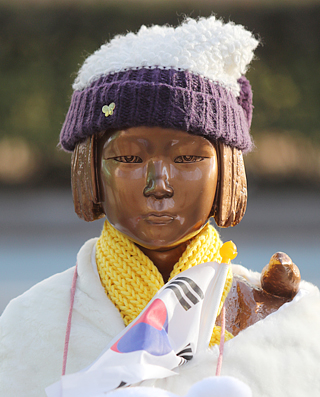 Korea’s Ministry of Foreign Affairs sent a letter to the Busan city government encouraging the removal of a statue representing victims of Japan’s wartime sexual slavery, the cause of diplomatic tensions with Tokyo.

But after receiving the letter, Busan’s Dong District Office declared on Thursday it has no intention of removing the monument.

The Foreign Ministry on Thursday confirmed it sent an official letter on Feb. 14 to the Busan Metropolitan Government and its Dong District Office, where the statue was installed at the end of last year.

In a statement, it quoted the letter as saying, “The location of the statue is not desirable in terms of international comity and custom involving the protection of diplomatic missions.”

A local civic group installed the tribute to women forced into sexual slavery by the Imperial Japanese Army before and during World War II, euphemistically referred to as comfort women, near the back gate of the Japanese consulate in Busan.

The letter repeated the ministry’s position that the central government, municipal government and civic organizations need to consider “moving the statue to a more appropriate location where the sexual slavery issue can be remembered as a lesson of history for a long time.”

This letter was sent just ahead of a meeting between Korean Foreign Minister Yun Byung-se and his Japanese counterpart Fumio Kishida in Germany on Feb. 17. It is seen as a gesture to Tokyo that Seoul has been putting some effort into resolving the diplomatic contretemps over the statue.

However, Park Sam-seok, head of Busan’s Dong District Office, declared on Thursday, “The Foreign Ministry may have sent such an official letter to fulfil its obligations, but what use is it? The Dong District Office cannot remove the statue and has no plan to do so.”

Busan’s version of the bronze statue of a young girl, similar to the Peace Monument across from the Japanese Embassy in central Seoul, was financed by 8.5 million won ($7,470) in individual donations from locals and had over 8,000 people petitioning for it.

The Dong District Office initially tried to block the civic group from installing the statue on Dec. 28, even hauling it away by truck. But it restored it to its original location a few days later after massive public complaints.

The Korean and Japanese foreign ministries struck a deal to resolve the so-called comfort women issue on Dec. 28, 2015, consisting of the Japanese prime minister’s apology and a 1 billion yen ($8.8 million) fund for the victims.

Some victims and civic organizations raised concerns about a clause that says the Korean government “acknowledges” that Japan is concerned about a comfort women statue in Seoul.

Daegu’s Jung District Office is clashing with a civic organization over a plan to erect another comfort women statue on March 1, Independence Movement Day.