North breaks its silence on killing

North breaks its silence on killing 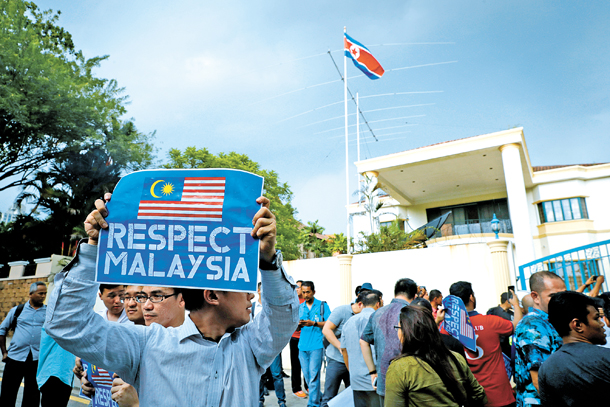 Members of Umno Youth, the United Malays National Organization’s youth wing, protest against the killing of Kim Jong-nam outside the North Korean Embassy in Kuala Lumpur, Malaysia, Thursday. North Korea denied Thursday being involved in the killing, saying a Malaysian investigation into the death of one of its nationals is full of “holes and contradictions.” [AP/YONHAP]

Pyongyang accused Seoul of drumming up a “conspiratorial racket” around the murder of one of its citizen in the Kuala Lumpur airport last week - while adamantly refusing to acknowledge that the dead man was their leader’s half brother or that he was assassinated by poison.

The charge was contained in an article published Thursday by the Korean Central News Agency (KCNA). It was the first official acknowledgement from KCNA of anything related to Kim Jong-nam’s death in the Malaysian capital.

The report came a day after Malaysian police announced that a second secretary at the North Korean Embassy in Malaysia was the latest suspect in the assassination of Kim, the strongest hint yet that his half brother ordered the plot to kill him. North Korea asserted in the KCNA report that South Korean authorities had “long expected” the death of its citizen, whom it did not identify in any way, and that it “worked out a scenario for it.” It accused Seoul of trying to use the incident for its own diplomatic benefit.

“On Feb. 14, a day after his death, the Blue House kicked up a fuss over it and South Korean authorities were busy holding a ministerial meeting on Feb. 16, showing an excessive response,” the article read.

“Moreover, they openly discussed the issue of Thaad [Terminal High Altitude Area Defense] deployment though it has nothing to do with the death of a DPRK citizen.”

“The biggest responsibility for his death rests with the government of Malaysia as the citizen of the DPRK died in its land,” the article continued.

North Korea said it was told by Malaysian authorities that the man, who was traveling on a diplomatic passport, died of a heart attack. After that, the North decided to transfer his body to the embassy and have it cremated. An autopsy wasn’t necessary because the cause of death had already been confirmed, said the article.

The North said a post-mortem should not have been performed because the victim “enjoyed extraterritorial rights according to the Vienna Convention as a carrier of a diplomatic passport,” referring to the fake travel document Kim Jong-nam held at the time of his death, in which he used the alias “Kim Chol.”

The North said it was “ready to dispatch a delegation of its jurists” to Malaysia, proposing once more their participation in an investigation by Malaysian police, which has been rejected multiple times before.

In response, Malaysia’s Minister of Foreign Affairs Anifah Aman reportedly discouraged Malaysians from visiting North Korea, saying it was a “rogue state,” according to The Star, a Malaysian newspaper.

“You cannot predict what they will do,” he said. “This is not North Korea. This is Malaysia. We have our laws.”

Asked about the North’s accusations, Jeong Joon-hee, South Korea’s spokesman for the Ministry of Unification, which handles inter-Korean relations, said it was “pointless to even respond.”

A source in South Korea’s Ministry of Foreign Affairs brushed off North Korea’s claim that it held autopsy rights over Kim’s corpse, saying that the rule only applies to actual diplomats. Malaysian police confirmed that the passport he carried was ostensibly diplomatic but Kim Jong-nam had no position in North Korea’s government.

A relative of Kim is expected to arrive in Malaysia today or tomorrow for a DNA test that will help Malaysian police definitively conclude whether the North Korean man murdered on the morning of Feb. 13 at Kuala Lumpur International Airport was the half brother of North Korean leader Kim Jong-un, according to The New Straits Times, a news outlet in Malaysia.

The paper cited Noor Rashid Ibrahim, deputy inspector-general of Malaysian police, as saying that the relative lives “not far from Malaysia” and that he or she “may be a child.”