Politicians trade views on how Park could quit

Politicians trade views on how Park could quit 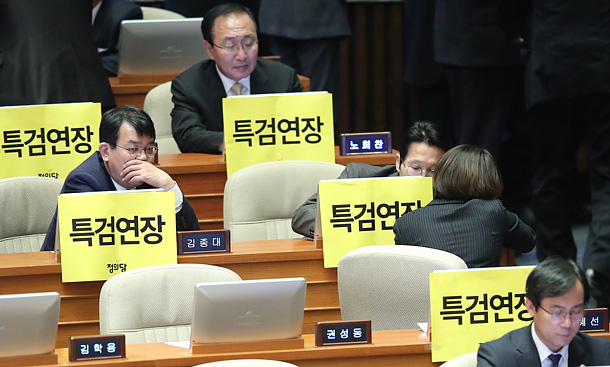 Lawmakers of the liberal Justice Party attach signs reading “Extend special prosecutors’ probe” on the back of their computer screens in the main conference hall of the National Assembly on Thursday. A bill to extend the probe failed Thursday. [YONHAP]

Speculation is growing in political circles that President Park Geun-hye will resign before the Constitutional Court rules on her impeachment in the coming weeks in a bid to delay - or avoid - the criminal justice process over her alleged abuse of power and corruption.

Conservative politicians are increasingly suggesting that a political resolution - Park’s voluntary resignation - is desirable as the Constitutional Court gets closer to ruling on whether to remove her from the presidency. Closing arguments in Park’s impeachment trial will take place on Monday. A ruling is expected before Acting Chief Justice Lee Jung-mi retires on March 13.

Rep. Choung Byoung-gug, chairman of the Bareun Party, addressed the idea with his Democratic Party counterpart Rep. Choo Mi-ae on Tuesday, according to a Bareun Party source. “I heard that the resignation would come on Sunday,” Choung was quoted as telling Choo. Choo replied that the scandal and the impeachment must be resolved on principles, no matter what decision Park makes.

The Blue House denied the whole idea of a resignation. “We never considered it,” a presidential aide said. “Park will ride out the impeachment process.”

Meanwhile, the opposition parties’ attempt to revise the law governing the independent counsel to extend its investigation period failed Thursday, as National Assembly Speaker Chung Sye-kyun refused to arrange a vote in the face of a ruling party protest. Unless Prime Minister Hwang Kyo-ahn, the acting president, grants an extension, the probe will end on Tuesday.