Why is Kim so ruthless?

Why is Kim so ruthless? 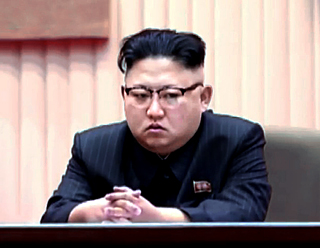 Psychologists have been invited to share their professional analysis for better understanding of the leaders of today. The fall from grace of our impeached president can be attributed to her traumatic childhood, having grown up as the daughter of military strongman Park Chung Hee, who led the country out of poverty. Our president went through the trauma of both her mother and father being assassinated. The unorthodox ways of a controversial president of another nation have been ascribed to his business deal-making habits as a real estate mogul. Such insights can bew valuable. But blaming the choices of a leader simply on his or her psychology could be a dangerous simplification.

The most erratic and dangerous man in the world today could be Kim Jong-un. The thirty-something North Korean leader has ordered the execution of his uncle and is suspected to be behind the assassination of his half-brother Kim Jong-nam in the Kuala Lumpur International Airport. His reign of terror is notorious. He has ordered killed more than 100 senior officers and made a hobby of replacing army generals.

On his orders, Pyongyang has conducted five nuclear tests and boasts of having perfected an inter-continental ballistic missile that can reach as far as U.S. territory. It threatens strikes with nuclear weapons. The leader is portrayed as a madman with his hand on the red button that fires nuclear missiles.

That the younger Kim is ruthless is unquestionable. But he is not necessarily crazy. If he had an uncontrollable violent temper, his father would not have groomed him to succeed him. His economic policy alone shows him to be practical to an extent. It may be naïve to blame an instable temperament for his acts of brutality and to assume that they underscore the vulnerability of the North Korean state. Such a simple interpretation could distort our North Korean policy.

Tyranny could be his choice. It is certainly his inheritance. Kim Jong-un may be naturally ruthless, or strategically so. It could be a means to maintain power. Soviet leader Joseph Stalin resorted to an infamous reign of terror. Under his command, 5 percent of the Soviet population was killed. He ordered the execution of 700,000 from 1937 to 1938. Such sheer brutality reveal him to be a hideous madman. But such terror was also necessary to build his authority and transform the Soviet Union into a global superpower. Studies of confidential documents by Stalin paint him as a reasonable dictator.

We must understand the context that has brought out the cruelty in Kim in order to understand the dynamics or weaknesses in North Korea to shape our policy. The biggest implosive danger in North Korea is its private markets. A North Korea’s monthly salary can be exchanged for less than one U.S. dollar on the black market. A family needs at least $60 a month to live. So North Koreans mostly rely on quasi-illicit market activities to survive. No such socialist system existed in history.

Market activities could be fatally detrimental to the Pyongyang regime. Rationing was the primary control mechanism in North Korea. State rations of food, fuel and other necessities can buy loyalty from residents. But state handouts take up less than a fourth of food consumption of North Koreans these days. They get two-thirds from the market and the rest from self-sufficient farming. Since the state long ago stopped providing, North Koreans have learned to find their own means of survival. As result, North Koreans have become less reliant on the state.

What can weaken state control are bribes. North Koreans spend 10 percent of their earnings to pay bribes to government officials.

Government officials who cannot outright engage in market activities live off bribes. A kind of business understanding has been built between the bribing and the receiving end. An illicit business community beyond the control of Kim has sprouted to keep the country running. What might scare Kim most is that some of the elite are building riches through commerce and market activities. Once they taste the honey of capitalism, they could turn their backs on Kim. Under such circumstances, Kim would have to force loyalty from the elite and bureaucrats through a reign of terror. He does not attempt to clamp down on the market, having seen the disastrous effect of a currency devaluation policy of his father. Instead he exercises terror to intimidate and control market players.

If we don’t recognize Kim’s strategies, we can never bring about change in North Korea. Both the liberals and conservatives must break out of a naïve and ideological spectrum and look at North Korea from an objective perspective. We must see through the realities of North Korea in policymaking to come up with strategy beyond a carrot-and-stick policy.