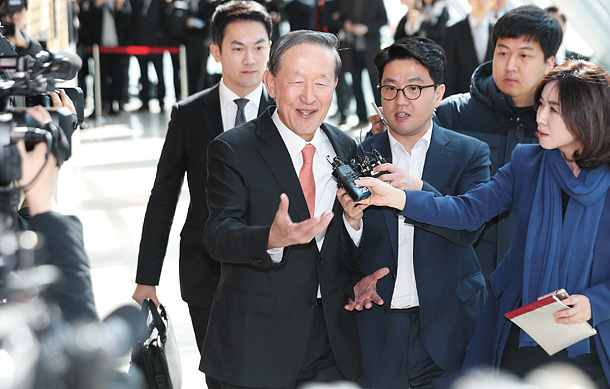 Huh Chang-soo, chairman of the Federation of Korean Industries, answers questions from reporters while heading to a meeting at the lobbying group’s headquarters in Yeouido, western Seoul, on Friday. [YONHAP]

Huh Chang-soo, the current chairman of the Federation of Korean Industries, will stay in office for another three years as the search for a new chief to lead the country’s largest business lobbying group has made little progress with key members withdrawing their membership, the organization said Friday.

FKI board members recommended Huh continue his duties for another three years at a board meeting earlier in the day, and Huh accepted their proposal, the group said.

Previously, a board meeting involved around 150 member companies out of a total 600, according to FKI officials.

But following the recent departure of four conglomerates and many others, Friday’s meeting was attended by only around 100 members, the officials said.

The board meeting came amid a mass withdrawal of key members, including Samsung Group and Hyundai Motor Group, following a corruption scandal involving what is believed to be illicit donations arranged by the FKI for two sports foundations controlled by President Park Geun-hye’s friend Choi Soon-sil.

The two leading business groups, along with many others, including SK and LG, have quit the organization after they and the FKI were implicated in the corruption scandal that has led to the impeachment of President Park.

The search for a new chief has been fruitless amid a series of withdrawals of key member companies that is also threatening the very existence of the organization after more than 50 years since its foundation.

The four business groups - Samsung, Hyundai Motor, SK and LG - and their affiliates are said to have accounted for nearly half of the 50 billion won ($43.6 million) that the FKI collected in membership fees last year.

Huh, whose term is due to end this month, has served as chairman since 2011.

“We once again apologize for causing concern to citizens and promise to emerge as a completely new entity through an overhaul,” Huh said in a statement.

Huh, who also serves as chairman of GS Group, said the FKI will redouble efforts to make its operations more transparent and clean, and sever collusive links between political and business circles.

The FKI board members also picked Kwon Tae-shin, head of the Korea Economic Research Institute, as the organization’s vice chairman.

The FKI has been under growing pressure to come up with drastic measures that will keep it from being dissolved or disbanded.

In the past, the FKI, established in 1961, has served as a key entity in spearheading the country’s stellar economic performance under state-led economic development strategies.

But recently, the organization has been in the spotlight after the scandal involving Park broke, with its fate becoming one of the key issues regarding reform of the country’s family-run conglomerates. YONHAP