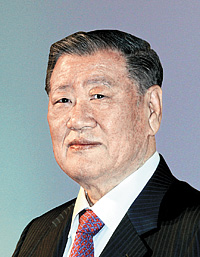 For both companies, the rank was their highest yet. Hyundai moved up 13 spots from last year and Kia by six. 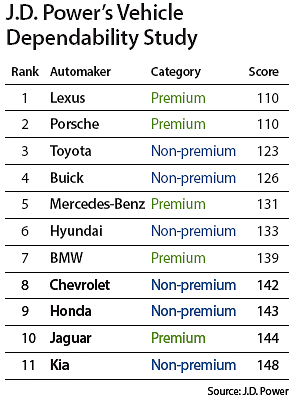 On the non-premium list, Hyundai Motor ranked third, after Toyota and Buick, while Kia was sixth.

The annual study evaluates “dependability” by surveying owners of vehicles that have been purchased between September 2013 and February 2014 and evaluates them based on 177 specific problems. The general score of a brand is determined by the number of problems detected per 100 vehicles. A lower score suggests fewer problems and higher quality.

Hyundai Motor received 133 points while Kia Motors received 148 points, both of which were the best scores since the two companies began participating in the test in 2000.

“Hyundai’s dedication to product quality is a foundational part of our overall strategy,” said Barry Ratzlaff, vice president of consumer satisfaction at Hyundai Motor America. “The Vehicle Dependability Study ranking demonstrates our continuous effort to be better. Quality is a priority for customers, and we are constantly trying to improve the indicators measured by the J. D. Power Initial Quality Study rankings, thereby improving long-term dependability.”

J.D. Power recognized Hyundai as the most improved carmaker.

Hyundai Motor and Kia Motors have placed in the upper tier of J.D. Power’s Initial Quality Study, which measures the short-term satisfaction rate of car purchasers. Last year, Kia topped the list, overthrowing Porsche which had been reigning for the past three years. It was the first Korean carmaker to make No. 1. Hyundai Motor followed in third.

Chung, the chairman of Hyundai Motor Group, has been strongly pushing an initiative within the company to improve the quality of its products in order to compete in the global market against long-time powerhouses like Toyota, BMW and Mercedes-Benz.

Before Chung took over Hyundai Motor Group in 1999, the company had a bad reputation in the global market even as it made its first entry into the U.S. market in 1986. The company’s vehicle quality was often the butt of jokes.

When Hyundai Motor participated in its first J.D. Power quality review in 2000, the automaker ranked 34th. Kia Motors was the lowest-ranked carmaker, at 38.

Things started turning around after Chung started stressing product excellence. The chairman, who is notorious in the industry for his hands-on management approach, took actions to improve quality control during production and put after-sales service into one business unit that he personally managed. Chung even created a special team of experts in 2014 to retest the quality of new vehicles.

“We will continue to maintain our quality competitiveness at the world’s highest and continue to strengthen customers’ trust through innovation and sales,” he said.

“The company’s effort to innovate quality has been surfacing since 2013 in new cars,” a Hyundai Motor spokesperson said. “This was reflected in the dependability test.”