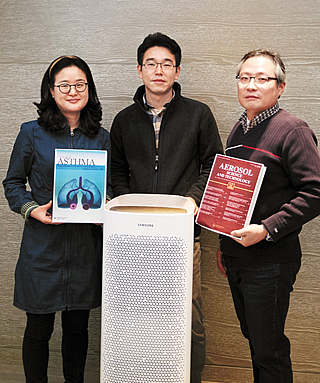 In 2015, Samsung Electronics and Stanford University collaborated on a study examining the effects of air purifiers on respiratory health.

The results were published last year in two articles: “Effectiveness of Air Purifier on Health Outcomes and Indoor Particles in Homes of Children with Allergic Diseases in Fresno, California: A Pilot Study” in the Journal of Asthma, and “Mixing and Sink Effects of Air Purifiers on Indoor PM2.5 Concentrations: A Pilot Study of Eight Residential Homes in Fresno, California” in Aerosol Science and Technology.

Between April and July 2015, the research team studied how air purifiers can improve indoor air quality and manage respiratory diseases. The team selected 16 households with a child affected by respiratory disease in Fresno, California, an area with a high amounts of fine dust.

It then divided the households into two groups: one with Samsung’s BlueSky air purifier installed in their home and one without.

The team observed the children’s symptoms and monitored the concentration of fine dust, heavy metals and viruses.

After examining the children’s lung capacity for 12 weeks, the team discovered that the group using a BlueSky air purifier had better health conditions compared to the other group.

The study also found that the air purifier reduced the concentration of fine dust by 50 percent, heavy metals by 19 to 26 percent and viruses by 29 to 37 percent.

The team concluded that air purifiers have a significant effect on relieving respiratory symptoms.

In particular, the study confirmed the capability of Samsung’s BlueSky air purifier. The product can effectively eliminate substances that can harm people’s health.

“Recovering sick children’s respiratory ability can make a difference on the child’s life as well as the family’s,” the Stanford team said.

“Samsung Electronics has conducted a deeper study on air quality, as the issue of fine dust increasingly becomes a more serious international problem,” a Samsung spokesperson said. “Our company will strive to develop innovative products that can benefit our consumers’ health and environment.”