Kaist chooses one of its own to serve as president

Kaist chooses one of its own to serve as president 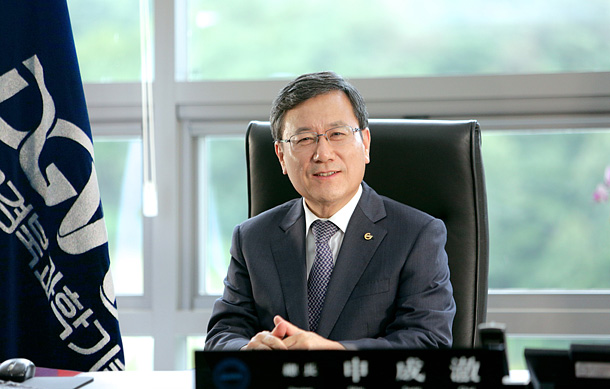 For the first time since the Korea Advanced Institute of Science and Technology (Kaist) was established in 1971, an alumnus of the school has been elected president.

The Kaist board of trustees elected Professor Shin Sung-chul of the department of physics as the institution’s 16th president Tuesday.

“We believe that Professor Shin’s scientific achievements, outstanding leadership and clear vision will serve Kaist’s faculty, students, and staff very well,” the board of trustees said. “He will be the best person to help Kaist leap forward in the four years ahead.”

Shin graduated from Kyunggi High School and Seoul National University majoring in applied physics. He entered Kaist’s master’s program majoring in condensed matter physics in 1975 and earned a Ph.D. in materials physics from Northwestern University in the United States.

Shin worked at Eastman Kodak Research Lab in the United States as a senior researcher before becoming a professor of physics at Kaist in 1989, when he was 37 years old.

“Kaist has been working hard to adopt the best education system for the past 13 years,” Shin said. “Kaist took sixth place in the list of the World’s Top 100 Most Innovative Universities last year and it is very important for us right now to establish our own educational system.”

The reason Shin cited 13 years is because the school was led by American presidents starting from 2004, when Robert Laughlin, who was awarded the Nobel Prize in physics, was named president. Laughlin’s successors Suh Nam-pyo and Kang Sung-mo were U.S. citizens.

Shin said he will strive to make the school one of the top 10 in the world. He selected five sectors - including education, research and globalization - as main areas to work on. He also promised to not force undergraduates to declare majors since he believes it’s important for undergraduate students to study various subjects and not focus too early on one.

To make the school more global, Shin wants students and faculty to communicate in English outside of class, as in Singapore and Hong Kong. He wants a bilingual campus where people speak both in Korean and English.

Furthermore, Shin plans to improve the research centers in the campus while training students to learn about businesses. He said he will expand the number of international faculty members and students.

“I will focus on training people to better respond to the fourth industrial revolution,” said Shin.

The Minister of Education and Minister of Science, ICT and Future Planning will decide on whether to approve Shin as the new president and his term will be four years.