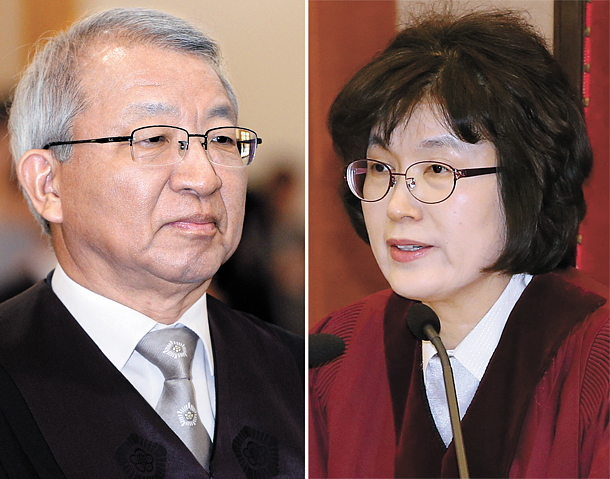 Following a media report that a successor to a retiring judge of the Constitutional Court will be nominated next week, President Park Geun-hye’s lawyers argued Friday that the new judge must be included in the ongoing impeachment trial.

The court rebuffed the argument.

“After the Constitutional Court hears closing arguments of Park’s impeachment trial, Yang will announce a nomination,” a source from the Supreme Court told the JoongAng Ilbo on Thursday. “There is a high possibility that the announcement will be made next week.”

The National Assembly impeached President Park on Dec. 9, 2016, for alleged constitutional and criminal violations by allowing her secret inner circle influence state affairs. Over the past months, the Constitutional Court held a series of hearings to decide whether to remove her permanently from office.

Closing arguments are scheduled for Monday and the judges are expected to take about two weeks after them to deliberate before announcing a ruling.

As of now, the Constitutional Court’s nine-member bench is running the trial with a vacancy. Chief Justice Park Han-chul ended his term on Jan. 31, 2017, and Acting Chief Justice Lee’s tenure will end on March 13, 2017.

“If the Supreme Court nominates a successor, it can be seen as a message to the Constitutional Court to take more time before making the ruling,” said Chang Young-soo, a professor of law at the Korea University.

The National Assembly’s impeachment committee, which acts as the prosecution in the trial, has argued that the court must rule on the case before another vacancy is created on the bench on March 13.

Following the report about the Supreme Court’s plan to nominate a successor to the outgoing acting chief justice of the Constitutional Court, Park’s lawyers said closing arguments in the impeachment trial must be delayed.

“The nomination is a significant change of the situation concerning the trial,” said lawyer Sohn Beom-kyu. “We will notify the Constitutional Court our objection to its decision to wrap up the hearings and hear closing arguments [on Monday].”

The ruling Liberty Korea Party supported the argument. Rep. Kim Jin-tae, chief negotiator from the party on the Legislation and Judiciary Committee, issued a statement Friday, signed by all ruling party members on the committee, to demand more time for the impeached president in the trial.

“The acting president and the Supreme Court chief justice should nominate successors to Acting Chief Justice Lee Jung-mi and former chief justice Park Han-chul,” said Kim. “When the vacancies are filled, the Constitutional Court has no reason to hurry. It must guarantee enough defense time for the president and make a ruling by including the successors.”

The Constitutional Court said it will not change the closing argument date. “Monday is the day,” Bae Bo-yoon, spokesman of the court, said Friday. “The eight justices had an agreement and made the schedule. There will be no change.” The court also said Park’s lawyers did not submit a final statement before a Thursday deadline. The National Assembly said it submitted a 297-page statement to the court on Thursday and is preparing its final argument.