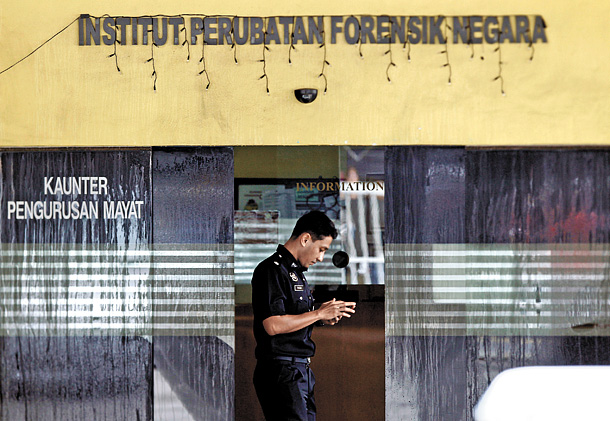 A police officer checks his phone inside the forensic department at Kuala Lumpur Hospital in Malaysia Friday. Police announced the banned chemical weapon VX nerve agent was used in the murder of Kim Jong-nam last week at the airport in Kuala Lumpur. [AP/YONHAP]

“The chemical substance on the exhibits has been identified as VX nerve agent,” Inspector General Khalid Abu Bakar said in a press briefing on Friday. The inspector general added that the chemical was detected from swabs of Kim’s eyes and face, citing a preliminary toxicology test by the Malaysian government’s chemistry department.

The odorless and colorless VX nerve agent is classified as a weapon of mass destruction by the United Nations. The U.S. Centers for Disease Control and Prevention (CDC) classifies VX as “the most potent of all nerve agents.”

The Malaysian authorities said they are investigating how the internationally banned chemical weapon made its way into Malaysia.

South Korea’s Ministry of National Defense stated in its 2014 Defense White Paper that the North is suspected to have stockpiled some 5,000 tons of sarin and VX nerve agents.

The inspector general refused to comment on whether the North Korean government was behind the assassination. South Korea’s intelligence chief told lawmakers in a closed-door meeting after the murder that it was a “standing order” of Kim Jong-un to kill his half brother for at least five years.

The Malaysian police announced earlier this week that a second secretary at the North Korean Embassy in Malaysia was a suspect sought in the assassination. The highly toxic chemical can take the form of gas or liquid, and a human coming into contact with as little as 10 milligrams by skin, eye or inhalation will die within minutes. The CDC said symptoms of VX exposure include abnormally low or high blood pressure, blurred vision, chest tightness, confusion, drowsiness, headache, nausea, vomiting and abdominal pain.

Experts have conjectured that an Indonesian woman and Vietnamese woman held by authorities in Malaysia as suspects applied the chemical to Kim’s face from the front and behind using their hands.

Satoshi Numazawa, a toxicology professor of Showa University in Japan, told local media outlets earlier this week that he suspected the VX nerve agent in its liquid form was mixed with a type of cream and used by the suspects. He conjectured that the suspects may have been wearing gloves.

“Or they may have gotten atropine shots immediately after,” said a chemical expert in Korea. “Atropine would counteract the VX nerve agent and stop the nerve agent from spreading throughout the body.”

Malaysian authorities have not confirmed how it was that the two female suspects used the lethal VX nerve agents and managed to survive.

In the ongoing investigation into the murder of the estranged half-brother of the North Korean leader, Malaysian police arrested Wednesday a Malaysian suspect at a condominium in Kuala Lumpur, the Star, a local paper, reported on Friday.

Authorities found the man in his 30s had stocked up chemicals at another condominium he was staying at. They are investigating whether he was involved in the assassination and had communicated with Ri Jong-chol, a North Korean suspect held in Malaysia. Four North Korean suspects were reported to be back in Pyongyang by Malaysian media this week.

Though there have been media reports that a relative of Kim is expected to arrive in Malaysia today to identify and claim his body, the inspector general of Malaysian police refused to confirm it. He said the police requested information about Kim’s relatives from the North Korean Embassy.