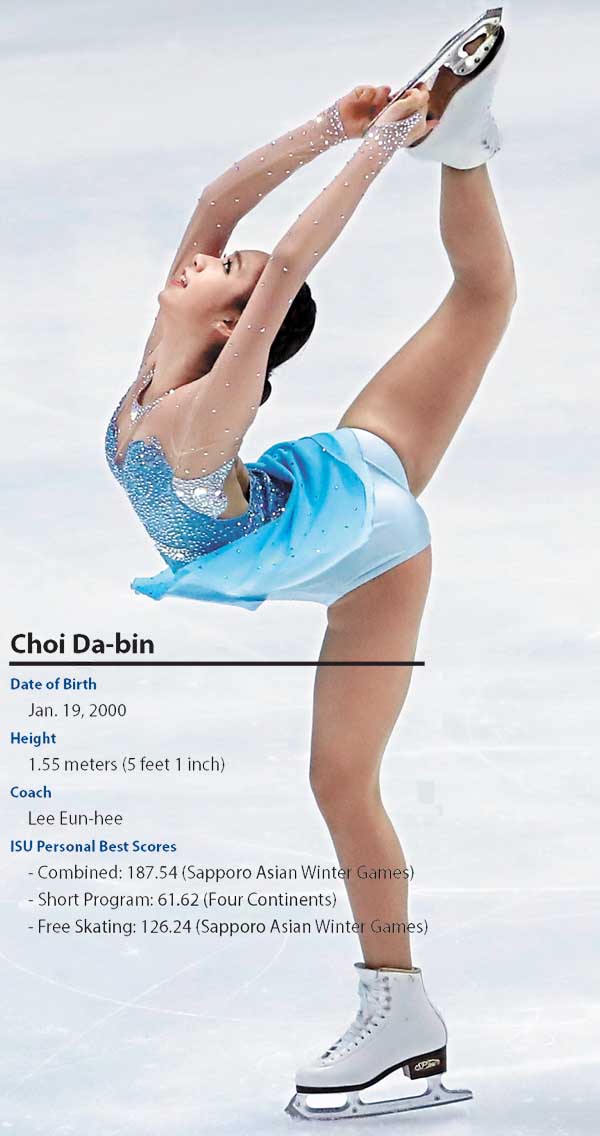 Choi was lucky to earn a spot in the Asian Winter Games, as it was only possible when Park So-yeon withdrew at the last minute due to an ankle injury. Originally, Choi was unable to compete since she finished fourth at the 2017 Korean Championships in January. But she turned her sudden opportunity into a moment of great success.

During the event, Choi earned a total score of 126.24 in women’s singles free skating, with a Technical Element Score (TES) of 68.40 and a Program Component Score (PCS) of 57.84. Added to her score of 61.30 in the short program on Thursday, Choi finished first out of 24 skaters with a combined score of 187.54, her new personal best.

Although Kim Yuna was the only figure skater in 100 years to finish within third place or better in all the events she competed in, she has never won a gold medal at the Asian Games. Kim withdrew from the 2007 Changchun Asian Winter Games due to a back injury and decided not to compete in the 2011 Astana-Almaty Asian Winter Games as she took a break after winning a gold medal at the 2010 Vancouver Winter Olympics.

Choi started figure skating at age five with her sister. At 11, she mastered five categories of triple jumps, and in 2012 at age 12, Choi earned her spot on the national team. Since then, Choi finished sixth at the 2014 International Skating Union (ISU) Junior World Championships and earned two bronze medals at the 2014-2015 ISU Junior Grand Prix.

As she competed in more international events, Choi’s weakness, expression, has improved. Choi currently attends Suri High School, where Kim Yuna also graduated, and she recently joined AT sports, the same management company as Kim, where she receives advice from Kim.

“Yuna taught me how to use my body and where to keep my eyes during my performance,” Choi said.

But aside from Choi’s successive results in the two most recent events, her performance has been inconsistent throughout the season. At the ISU Grand Prix of Figure Skating, she finished eighth and ninth.

After her poor finish, Choi decided to change everything. She changed her coach and the entire short program to the soundtrack of the film “La La Land” at the Four Continents, a test event for the PyeongChang Olympics.

After she changed her program, Choi had three weeks to master everything for the Four Continents. During that period she could only practice three hours a day to prevent injuries.

“Da-bin is a very fast learner,” Lee Eun-hee, Choi’s new coach, said. “When I point out something, she fixes it right away.”

Despite the short practice time she had to master a new program, the changes worked and she finished fifth in the event.

Choi was given another opportunity as Kim Na-hyun withdrew from the 2017 ISU World Figure Skating Championships in Helsinki, Finland in March. With her withdrawal, Choi earned her spot on the squad. The championship is an important event in the run-up to the PyeongChang Olympics.

If Choi finishes within the top ten, Korea can have two skaters compete in women’s singles event at the PyeongChang Olympics.

“I gained confidence from the Asian Games gold medal,” Choi said. “I’ll bring back good result from the World Championships.”