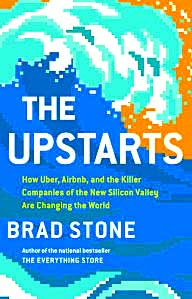 The Upstarts: How Uber, Airbnb, and the Killer Companies of the New Silicon Valley Are Changing the World

In the spirit of iconic Silicon Valley renegades like Steve Jobs and Bill Gates, another generation of entrepreneurs is using technology to upend convention and disrupt entire industries. These are the upstarts, idiosyncratic founders with limitless drive and an abundance of self-confidence. Led by such visionaries as Travis Kalanick of Uber and Brian Chesky of Airbnb, they are rewriting the rules of business and often sidestepping serious ethical and legal obstacles in the process. 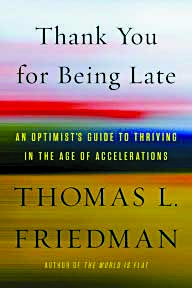 Thank You for Being Late: An Optimist’s Guide to Thriving in the Age of Accelerations

We all sense it — something big is going on. You feel it in your workplace. You feel it when you talk to your kids. You can’t miss it when you read the newspapers or watch the news. Our lives are being transformed in so many realms all at once — and it is dizzying.

In Thank You for Being Late, a work unlike anything he has attempted before, Thomas L. Friedman exposes the tectonic movements that are reshaping the world today and explains how to get the most out of them and cushion their worst impacts. You will never look at the world the same way again after you read this book: how you understand the news, the work you do, the education your kids need, the investments your employer has to make, and the moral and geopolitical choices the U.S. has to navigate will all be refashioned by Friedman’s original analysis.

Friedman begins by taking us into his own way of looking at the world — how he writes a column. After a quick tutorial, he proceeds to write what could only be called a giant column about the twenty-first century. His thesis: to understand the twenty-first century, you need to understand that the planet’s three largest forces — Moore’s law (technology), the Market (globalization), and Mother Nature (climate change and biodiversity loss) — are accelerating all at once.

Thank You for Being Late is a work of contemporary history that serves as a field manual for how to write and think about this era of accelerations. It’s also an argument for “being late” — for pausing to appreciate this historical epoch we’re passing through and to reflect on its possibilities and dangers.

With his trademark vitality, wit, and optimism, Friedman shows that we can overcome the multiple stresses of an age of accelerations — if we slow down, if we dare to be late and use the time to reimagine work, politics, and community. Thank You for Being Late is Friedman’s most ambitious book — and an essential guide to the present and the future.

The Upstarts is the definitive story of two new titans of business and a dawning age of tenacity, conflict and wealth. In Brad Stone’s riveting account of the most radical companies of the new Silicon Valley, we discover how it all happened and what it took to change the world. 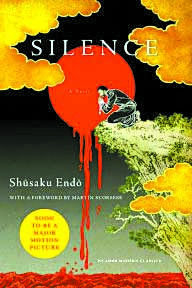 “Silence I regard as a masterpiece, a lucid and elegant drama.” — The New York Review of Books

Seventeenth-century Japan: Two Portuguese Jesuit priests travel to a country hostile to their religion, where feudal lords force the faithful to publicly renounce their beliefs. Eventually captured and forced to watch their Japanese Christian brothers lay down their lives for their faith, the priests bear witness to unimaginable cruelties that test their own beliefs. Shusaku Endo is one of the most celebrated and well-known Japanese fiction writers of the twentieth century, and Silence is widely considered to be his great masterpiece.