‘Rush of Blood’ is an enthralling psychological thriller

‘Rush of Blood’ is an enthralling psychological thriller 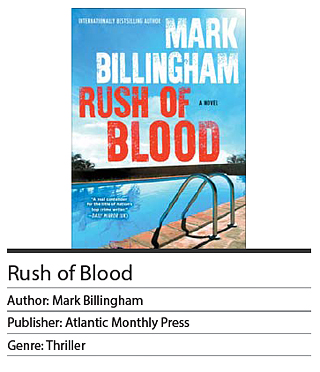 It’s a common situation — strangers meet on vacation, strike up a quick friendship and promise to keep in touch once everyone returns home. But how many people keep the relationship going post-vacation, and just how well do they know each other?

That scenario provides a compelling plot for Mark Billingham’s stand-alone thriller, “Rush of Blood.” Best known for his hard-boiled police procedurals about Tom Thorne, Billingham tones down the violence and smoothly integrates character studies of three couples into an absorbing psychological thriller. The chilling plot realistically intensifies as true personalities are revealed.

The couples — Barry and Angela, Ed and Sue, David and Marina — meet at the swimming pool of a Sarasota resort. They bond quickly as they are all British and live within driving distance of each other. During their two-week vacation, the couples enjoy going to dinner as a group, having drinks and chatting. On the last day of their Florida vacation, a tragedy occurs when the 14-year-old daughter of another guest goes missing.

Back in England, plans are made for the couples to get together to continue the friendship that came so easy in Florida, though enthusiasm has now waned a bit. What did they really have in common besides being British and at the resort the day the special-needs teenager went missing? The latter quickly becomes the main topic of conversation at the get-togethers that increasingly become uncomfortable. As they keep up with news about the American teen, another girl, about the same age and also mentally challenged, goes missing in Kent, not far from where they live.

Billingham alternates the couples’ stories with that of the Sarasota detective and a British trainee detective out to prove her value, who team up trans-Atlantic to investigate the teens’ disappearances. On the couples’ own turf, the frailty of each relationship emerges through betrayals, infidelities, manipulative behavior, money woes and uncontrollable anger. Seemingly harmless events such as a dinner party, drinks with friends and a shopping excursion become fraught with danger.

Interspersed throughout are the killer’s thoughts that show why these teens were targeted. Billingham handles these scenes so well that the identity of the murderer is never even hinted at until the stunning finale.

Billingham’s affinity for delving deep into psyches shines in the enthralling “Rush of Blood,” as he proves that sometimes the most domestic of situations can be the most chilling.