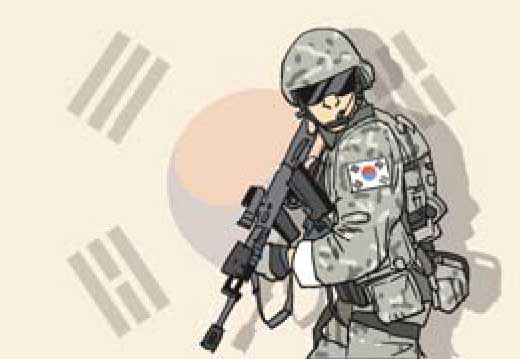 Vision and capabilities to command security have become top criteria for the next South Korean president. North Korea has been test-firing ballistic missiles and accused of committing the assassination of Kim Jong-nam, the elder half brother of North Korean leader Kim Jong-un, using an internationally banned toxic chemical agent in an international airport in Malaysia.

Conservative presidential contenders who have been mostly unpopular because of the disgraceful fall of President Park Geun-hye, have used the momentum to claim that they are most qualified on the security front. They have promised immediate deployment of one or additional U.S. antimissile system Terminal High Altitude Area Defense (Thaad) batteries, an increase in defense expenses, the acceleration of Korea’s homegrown missile defense system, and development of jet fighters — and even talk of raising taxes to increase the defense budget and nuclear armament. The public response remains calm to the uninventive and costly security measures. It may be due to disillusionment and distrust in North Korea and national security policies under conservative Presidents Lee Myung-bak and Park Geun-hye who sold the long-held belief that conservatives are better at defending the country from North Korea.

Let’s talk frankly. If heavier spending on arms and a stronger alliance with the United States guarantee national safety, and if such pledges help a presidential candidate win the election, there will be no easier task. What is essentially required for a ‘security president’ is wisdom, quality and vision on security. The next leader must be able to present a big picture addressing a myriad of problems related to Korean security.

Security is to ensure the protection and stability of our social viability, prosperity and dignity. Defense capabilities alone cannot ensure security even under a North Korean threat as a constant. Along with military capacity, the policy must incorporate economy, ecosystem, society, and human resources. It must be able to reflect the people’s historical aspirations through strategic design to augment national interests upon insightful comprehension of geopolitical and geoeconomical conditions so that policy is based on public consensus and support. Most of all, we need a leader that does not merely follow the wishes of global powers but directs policy entirely for national viability, prosperity, and dignity.

U.S. President Donald Trump should be a lesson for us. To win broad respect from the people, the leader must not be a person of stubborn, biased and rigid judgment and unpredictable whim. We cannot expect inventive breakthroughs by clinging to the traditional norm of rhetorical response to North Korean provocations and the repeated promise of a strong U.S.-Korea alliance. We must not waste time on the wishful thinking of an implosive collapse of the Pyongyang regime. We need a president with the flexibility and creativity to think and act beyond the complacent and defensive mindset at a time of grave challenges and changes looming over the Korean Peninsula.

National security requires sophisticated all-around judgment and a confident command over national systems and resources. A radical change cannot be expected out of the current bureaucratic system. The security-related government offices — Foreign Ministry, Defense Ministry, Unification Ministry, and National Intelligence Service — cannot break out their bureaucratic selfishness and mannerism to aggressively pursue national interests. Under Park, inter-Korean relations remained at a stalemate and the relationship with China soured because of the over-reliance of a certain government office. The next president must set the national priorities straight and draw cooperation and synchronized action from different government offices through checks and balances.

Most importantly, the leader must have a solid philosophy on national security. The essence of national security is to allow people to live safely without the worry of outside risks and danger. Modern governments endeavor to prevent catastrophes like a war, through the stable management of security affairs. The president must give top priority to ensuring stability and preventing catastrophes. Someone with this personal mission can wisely respond to security challenges beyond the populist context and can persuade the people and media to support his or her policy.

An economy can turn around through bailouts and restructuring. But there is no second chance if security crumbles. To be apt in security could be more difficult than commanding the economy. We must therefore be extra careful in choosing the right person for the job of combating political uncertainties on the home and international front.


*The author is a special professor at Yonsei University.