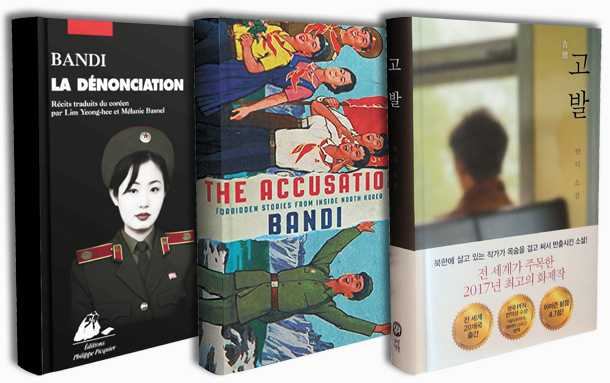 The revised edition of “the Accusation,” a short story collection by an alleged North Korean dissident writer, has been released in Korea, riding on the book’s newfound attention overseas. From left: The French translation of the book; the English version; and the revised Korean edition recently released in South Korea [YONHAP]

A short story collection from an alleged North Korean writer is under a renewed spotlight.

“The Accusation” by Bandi was first published in South Korea in May of 2014, but received little attention as a literary work. This was partly because no one was certain who Bandi was, or if the book was really written by a North Korean.
But the fate of the book encountered a change of tide late last year.

News surfaced that Deborah Smith, a British translator of Korean novels, won a PEN Translation Award from English PEN, for her translation of “The Accusation.” Smith won the Man Booker International Prize 2016 with South Korean author Han Kang for “The Vegetarian” in May of last year.

Smith’s translated version will hit shelves in the UK and U.S. next month. On March 2, it will be available in the UK; while on March 7, it will be released in the U.S. The book’s publishing rights have been sold to 20 countries. The book is already available in France, Japan and Portugal. 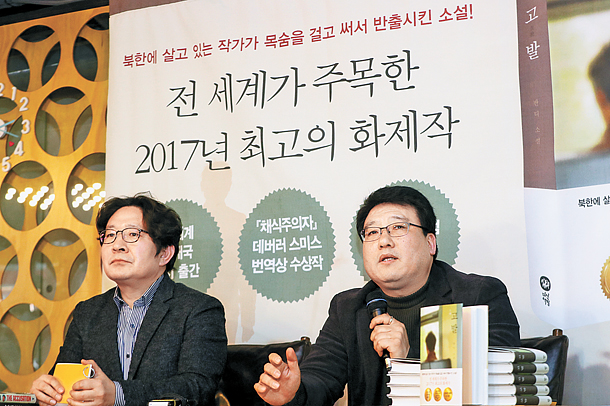 “While being true to the original, the revised edition is more concise and easier to understand [for South Koreans],” said Do Hee-yoon, an activist with The Citizens Coalition for Human Rights of Abductees and North Korean Refugees, during a press briefing in western Seoul early this month. The cover design has also become more sophisticated, he said.

Do’s civic group has been acting on behalf of Bandi on copyright issues.

The two Koreas, divided since the end of the 1950-53 Korean War, now use languages that are quite distinctive.

The book is a collection of seven short stories set in the 90’s that give a glimpse into the life of average people in North Korea. Through their experiences that appear rather mundane, the North Korean dissident writer, known only by the pseudonym Bandi, criticizes the repression and the hopelessness the people feel.

Do said they first received the original copy in 2013 through a defector who is a relative of Bandi. The copy was smuggled, wrapped in propaganda material.

Bandi stands for bandibulyi, or firefly, which represents the writer’s will to light up the darkness in the North through his works.

Some North Korean defectors believe that given Bandi’s works are set in the 90’s, the writer may have been dead for a while, or is someone who left the North years ago.

But according to Do, Bandi is a man born in 1950. He is part of North Korea’s elite writers’ association and is alive. The writer lives in a place near Pyongyang in North Korea that’s relatively open to outside travelers, even having access to certain radio program by KBS, which is the channel Do uses to let Bandi know the latest about the book’s release.

But Do added that the credentials of Bandi that he has shared are not 100 percent true and that has to be the case because otherwise he will be tracked down by the North Korean regime. “The author has already published many works in the North. So we should be discreet about his identity,” he said.

For this reason, the publisher and the group refused to share the handwriting of Bandi. They said the North Korean regime can track down its people by their handwriting.

“We should understand that not all dissidents want to flee the regime. Many of them do what they can to produce positive change,” he said. “They are not afraid of losing their life for what they do.”

Do added that he contacted Bandi about eight months ago through an “unofficial route.”

The unification ministry, however, reportedly adheres to the position that it cannot confirm Bandi’s credentials.

Joseph Lee, president of Korean Literary (KL) Management, the group in charge of the book’s copyright sales overseas, said that it’s true that the book is gaining popularity abroad largely because of the idea of the book itself — being smuggled out of the reclusive country in such a dramatic way.

“However, when you read the book you will see its literary value,” he said at the press briefing. “We hope it’s seen as one of many different literary voices in the global literature market.”

Hannah Westland of publisher Serpent’s Tail, which acquired the book for UK publication, told the Guardian that the book “isn’t just a book with a good story behind it: it’s a collection of perfectly crafted novellas that, like Aleksandr Solzhenitsyn’s work (from the old Soviet Union), speak with authority and truth-to-power directness.”

While the resistance spirit is worthy of a praise, there are negative reviews as well. Brian Myers, an American literary critic, said, “As literature it is awful, with no literary value … The comparisons to Solzhenitsyn are an impertinence, but it does feel as if it were written by a North Korean. It has the turgid descriptiveness one finds in [North Korean] novels.”

Nonetheless, riding on the book’s newfound fame, the civic group is planning on releasing a book of poetry by Bandi as early as next month. In addition to that, the group has invited publishers from the 20 countries that will be releasing the book to a global conference on North Korean literature and human rights issues it plans to host in South Korea next month.