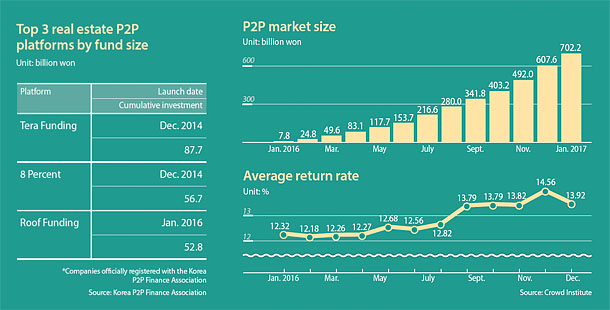 With the rapid growth of peer-to-peer investment - especially in real estate - and the inherent risks that come with the new financing option, the Korean government is beginning to enact measures to protect investors.

Starting this week, a guideline that sets ground rules for P2P platforms will go into effect nationwide. Other steps to safeguard investors from risk include ongoing efforts by the Financial Services Commission, the country’s financial regulator, to make credit businesses linked to P2P platforms register with the FSC regardless of size.

While the figures may differ by institution, P2P investment was without a doubt one of the hottest investment options last year.

According to Crowd Institute, a research center in Korea dedicated to P2P finance, the P2P market size grew to as much as 700 billion won ($616 million) by January this year, growing almost 14 times from 2015. The number of P2P platforms also skyrocketed to 131 in January this year from 16 in January 2016. 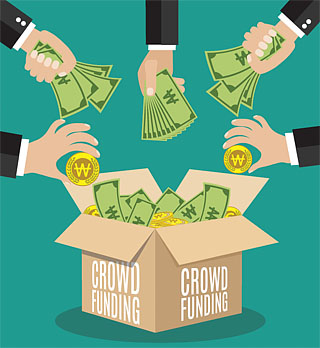 The Crowd Institute projects that by the end of this year, the size of the market will grow to as large as 1.5 trillion won.

Of the 700 billion won already in the P2P market, over half, or around 408 billion won, is in real estate, according to the institute. “Investors found P2P projects that use real estate as collateral less risky since it can better protect their principal in comparison to unsecured P2P lending based on the credit ratings,” the Crowd Institute’s report said.

A real estate P2P platform matches a builder with prospective lenders. Borrowers can typically get lower interest rates than at banks, while lenders get better returns.

“Similar to a stock investment, P2P lending entails the risk of principal loss,” said a spokesperson from Roof Funding, one of the biggest real estate P2P platforms in Korea. “Investors flock to platforms like us because we use real estate as collateral.”

Roof Funding’s model is project financing, which means investors crowdfund a project to build a building from scratch. If the builder goes bankrupt, the ownership is transferred to the investors, and they can choose to auction off the building or sell the units after completing construction with additional funding. “This way, we can provide a minimum safety net,” the spokesperson said.

On top of conventional wisdom that suggests real estate investments are safer, investors are flocking to P2P platforms like Roof Funding with the prospect of lucrative returns.

For instance, interest rates on one-year fixed deposits at local commercial banks as of Feb. 21 range from 1.10 percent to 1.75 percent, according to data from the Korea Federation of Banks.

If a person deposited 1 million won in a bank and left it for one year, the maximum interest earned would be a mere 17,500 won.

But it’s a different ball game when the money is placed in a P2P investment, where the interest earned at Roof Funding, for example, is about 18 percent and yields close to 220,000 won a year.

Roof Funding’s growth clearly demonstrates the rising popularity of P2P investment. Since opening up its service last January, the firm has accumulated about 52.8 billion won from investors while averaging a 17.21 percent interest rate. Another popular real estate P2P platform is Tera Funding, which has accumulated investment of 87.7 billion won, according to the Korea P2P Finance Association.

As of now, the default rates of both Tera Funding and Roof Funding are zero percent.

Despite the rising popularity of real estate P2P platforms, financial authorities in Korea warn that the investments may not be as safe as they seem. In one case, a firm called Money Auction declared bankruptcy last November after it was saddled with debt. Founded over a decade ago as one of the first P2P platforms in Korea, it faced a liquidity crunch after payment delays led the firm to owe over 4 billion won to investors.

Financial authorities worry that while real estate P2P platforms are enjoying unprecedented growth, the next Money Auction could be lurking somewhere in the midst, especially with a slow real estate market.

Those working in the P2P industry note that many apartments are struggling to attract buyers, and when the market suffers, smaller buildings like duplexes and multiplexes (the main investment targets of most P2P platforms) will likely feel the impact first, jeopardizing lenders’ interest and principal.

The market data is in line with such speculations. Real estate transactions in Korea have been in decline since the government initiated regulatory measures last year to cool down the market. In January, there were 58,539 real estate transactions, down from 88,601 in December and 102,888 in November, according to the Korea Appraisal Board.

In the wake of the Money Auction case and rising concerns about the real estate market, the country’s financial regulators in November vowed to establish guidelines for the P2P market and bolster protections for investors.

“The biggest concern is that there is no safety measure to speak of, despite what the platforms claim,” said an official from the consumer finance and protection bureau at the Financial Services Commission who requested anonymity. “Once the real estate market goes into a deeper slump, the probability that investors will suffer will inevitably go up.”

The official also warned that investors should not be blinded by the lucrative returns and must assess all possible risks when considering a P2P investment.

Important clauses in the guideline include a stipulation that retail investors can only invest up to 10 million won in one P2P platform per year. In addition, a P2P platform must create a separate account to manage the investment, independent from the company’s expense account, to protect investors’ money from embezzlement and insolvency.

Another part of the government’s effort is an amendment to the Act on Registration of Credit Business. Under the current law, only credit businesses with assets over 10 billion won are required to register with the Financial Services Commission. The FSC proposes that any credit businesses associated with P2P platforms register regardless of asset size. Most P2P firms currently operate as credit businesses.

“This is an initiative to supervise P2P platforms more effectively,” said Park Hyung-geun, an official from the nonbanking supervision division of the Financial Supervisory Service, another financial regulator. “Right now, they are not registered with the authorities and there is no legal obligation for them to fall under our supervision. But with the revised law, we can monitor their activities more closely to prevent any misconduct.”

Those involved in P2P question the fairness of the government’s rules. “There are no set regulations for P2P businesses, and they have no choice but to operate as credit businesses under current Korean financial law,” said Lee Seung-hang, president of the Korea P2P Finance Association. “Financial authorities have found it difficult to manage P2P companies for this reason, and the association has been cooperative with them so that both parties can mutually benefit.”

Lee complains that some clauses in the guideline are too restrictive. “For instance, about 80 percent of all investment made through January exceeded 10 million won, which is especially the case for real estate P2P projects,” he said. “If investors can only invest less than 10 million won per year, it is possible that the entire industry will take a heavy blow.”

“It is also unfair to force platforms to register with the FSC since none of them meet the minimum requirement of 100 billion won set by the Credit Business Act,” Lee added. “And most of these companies are start-ups and fintech firms, not credit businesses per se.”

Lee added that in countries like the United Kingdom and China, where P2P finance has found its footing, such limits and regulations over the market came into the picture five to six years after P2P financing took off in their respective country. According to a Business Insider report, the P2P lending industry in the United Kingdom grew to as much as 4.5 billion pounds ($5.6 billion) by 2016. It also predicted that by 2020, it will reach 16 billion pounds.

“The government is trying to restrain the activities of the business just about one year since the market really hit it off,” Lee said. “It’s too premature to impose any regulations on these companies. At this rate, it’s going to be difficult for P2P firms in Korea to have any competitive edge internationally.”