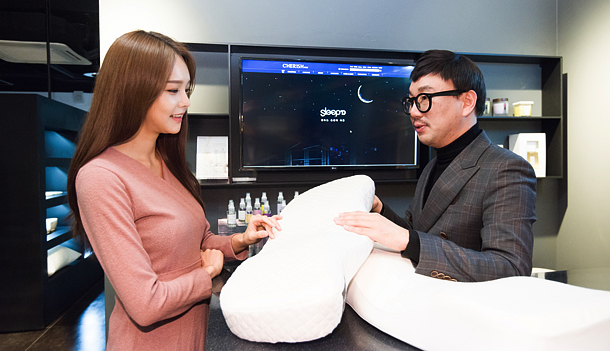 A Sleep D consultant gives advice to a customer on the type of pillow she should use at furniture brand Cherish’s brick-and-mortar store in Gangnam District. [CHERISH]

Choi Yoon-jeong, 26, has her own “deep sleep” routine. Before going to bed, she puts body cream on her neck that smells like magnolias. She checks that her black-out curtains are thoroughly closed so that sunlight can’t peep through any crook or cranny. The last step is turning on her heating mat. On nights she has to wake up early the next day, she takes supplementary pills that help her sleep deeper.

Choi, an office worker for six months, isn’t the only one filling her room with products purposed for quality sleep. As people focus more on the positive effects and importance of sleep, the trend is starting to show in sales of consumer goods and relevant services.

The term used to indicate this business sector is “sleeponomics.” According to the Korea Sleep Industry Association (KOSIA), the local market size for sleep-related services and products in Korea is around 2 trillion won ($1.77 billion). In Japan, the sleep-related market is 6 trillion won, which means Korea has more potential for growth.

As to why more Koreans are showing interest in sleep, Professor Huh Kyung-ok of Consumer Science and Living Culture Industry at Sungshin Women’s University said “Korea is a highly competitive society that values efficiency in many aspects of life. It’s natural people are looking for ways to relieve stress and make the most of their time sleeping.”

Figures on Koreans’ sleep and work support Huh’s insight: A 2014 report from OECD revealed that an average Korean sleeps 469 minutes a day, 40 minutes less than the global average of 502 minutes and the lowest among 18 OECD countries. Koreans’ average working hours were 2,124 hours a year, which was 20 percent more than the global average and the second highest among 34 countries.

Four million Koreans suffer from insomnia, accounting for 12 percent of the population. In last year’s report, the National Health Insurance Service said that the number of patients who visited the hospital for sleep-related disorders between 2010 and 2015 rose 57.4 percent to 455,886 people in 2015.

The first trend for consumers’ upbeat interest in quality sleep can be found in the rise of “motion beds,” which allow users to adjust angles of the mattress’ top, middle and bottom sections. The beds were mainly found only in hospitals, but they are an increasing presence in homes, particularly after one appeared this year in the famous television series “Guardian.” Domestic brand Iloom’s Argian Motion Bed, which appeared on the show, saw average monthly sales double in December compared to the previous five months.

Furniture is not the only product seeing a boost in sales - smaller interior pieces that help create a favorable sleep environment have also seen significant uplifts. E-commerce site Auction said that sales of white bedding with goose feathers or cotton jumped nearly tenfold between Jan. 1 and Feb. 16 compared to the previous year. Sales of black-out curtains rose 69 percent and blinds skyrocketed 108 percent.

Other interesting consumer goods related to good sleep are heated eye masks and a soda that contains counteractive substances to insomnia. According to beauty and health retailer Olive Young, MegRhythm’s disposable eye mask that heats up for 10 minutes after opening sold 40 percent more year on year between Jan. 1 and Feb. 21. The drink Soda Cow, which contains valerian juice known to induce sleep, has doubled its sales since its launch in October.

Small consumer goods are mainly favored by women in their 30s and 40s, while men favor products related to snoring, such as nasal strips that help them breathe better and prevent snoring during by widening the nasal passages. The product recorded a fivefold sales increase on Gmarket in February compared to the previous year.

The increased awareness of sleep deprivation has prompted the creation of services that didn’t exist in the past. Launched in December, the local furniture brand Sleep D provides consulting to consumers on how to organize the best sleeping environment. Sleep D’s consultants offer suggestions for pillows, mattresses, interior items based on the client’s sleeping pattern, habits, body shape and preference.

“A sleeping environment can include many other things other than the bed, such as the softness of the bedding’s fillings and the smell or visual elements we see before falling asleep,” said Yu Kyung-ho, CEO of Cherish, parent company of Sleep D. “Sleep D’s service was devised to help consumers find in them what kind of room they would best feel comfortable to fall asleep in.”

“We’re recently seeing a lot of convergence in the industry too, like pillows made with information technology. My expectation is that this convergence will push the market to grow even more to come.”