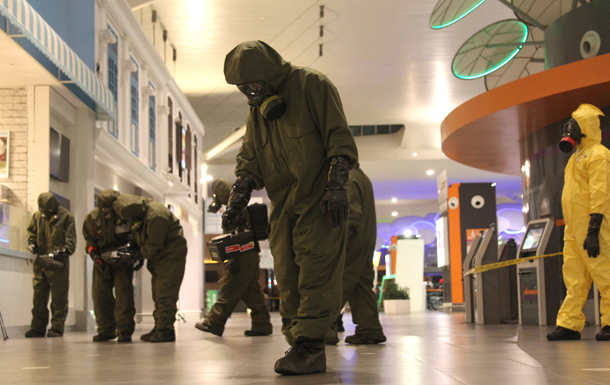 Malaysian officials in protective gear work to detect and remove traces of VX nerve agent, which was used to assassinate Kim Jong-nam, half brother of North Korean leader Kim Jong-un, at the Kuala Lumpur International Airport on Sunday. [YONHAP]

A police chief in Malaysia announced on Saturday that authorities will seek an arrest warrant for the second secretary of the North Korean Embassy in Kuala Lumpur, who is wanted for the assassination of Kim Jong-nam, half brother of North Korean leader Kim Jong-un, if he does not submit to investigation.

Abdul Samah Mat, police chief of Selangor state, told reporters Saturday at the Kuala Lumpur airport, where Kim was murdered on Feb. 13 by the VX nerve agent, that “reasonable” time will be given for Hyon Kwang-song, 44-year-old North Korean diplomat, to submit to questioning on his own accord, before local authorities summon him with an arrest warrant.

“And if he fails to turn up upon being given this notice, then we will go to the next step by getting a warrant of arrest from the court,” he said according to the Star, a local paper.

But given that diplomats are immune from legal prosecution in a foreign state, according to the UN’s 1961 Vienna Convention on Diplomatic Relations, which both North Korea and Malaysia are parties to, it is yet unclear whether an arrest warrant will have any effect.

While Malaysian authorities have not pinpointed the North Korean government as being behind the murder, Inspector General Khalid Abu Bakar told media outlets that North Koreans are suspected to be involved, including Hyon and an employee of Air Koryo, North Korea’s state-owned airline.

Malaysian Minister of Health Subramaniam Sathasivam confirmed in a press conference on Saturday that the VX nerve agent was used to kill Kim. He said the autopsy results showed the “chemical agent caused very serious paralysis” and must have killed him “in a very short period of time.”

The CCTV footage of the attack on Kim showed two women attacking him from in front and behind, the attack itself lasting not longer than three seconds. Kim died on his way to a nearby hospital in an airport ambulance car.

The odorless and colorless VX nerve agent is classified as a weapon of mass destruction by the United Nations. The U.S. Centers for Disease Control and Prevention (CDC) classifies VX as “the most potent of all nerve agents.”

The Malaysian authorities are investigating whether the VX nerve agent was concocted in Malaysia. Police found traces of chemicals in raiding the residences of a Malaysian suspect arrested last week.

Samah additionally announced the airport safe from any contamination from the chemical weapon after authorities swept through the airport on Sunday, though some criticized the inspection too late. The ticket kiosks area where Kim was attacked with the nerve agent was left open for nearly two weeks with no police lines.

The safety of his eldest son, Kim Han-sol, 21, is a matter of particular concern. In his interview in 2012 with Elisabeth Rehn, former Finnish lawmaker and former minister of defense in Finland, he called the North Korean leader a “dictator.”

In investigating the murder, Malaysian authorities have detained a Vietnamese woman Doan Thi Huong, an Indonesian woman Siti Aisyah, a Malaysian man Muhammad Farid Jallaludin, reported to be Aisyah’s boyfriend, another Malaysian man in his 30s and a North Korean man Ri Jong-chol. Jallaludin was released on Wednesday.

Aisyah told the Indonesian Embassy on Saturday that she was told to put a type of oil on Kim’s face as a prank for a TV show. She said she received some 400 ringgit ($90) for it. The Vietnamese Embassy in Kuala Lumpur also issued a statement on Sunday saying that Huong testified she thought she was acting as part of a TV show.

However, Inspector General Khalid Abu Bakar refuted last week the two women’s statements, and said they knew they were dealing with a toxic chemical and were aware of the assassination plot.

The Indonesian embassy officials said there was no sign that the VX nerve agent’s toxin affected Aisyah’s body.