Lee Seung-yeop, the greatest hitter in Korean baseball history, who is currently playing for the Samsung Lions of the Korea Baseball Organization, trained in Okinawa for his last spring camp in preparation for his very last season.

“Since I’m getting close to retirement, baseball seems more lovely,” Lee said during his interview with the JoongAng Ilbo in Okinawa on Feb. 14.

Q. How do you feel about this spring camp being your last one? 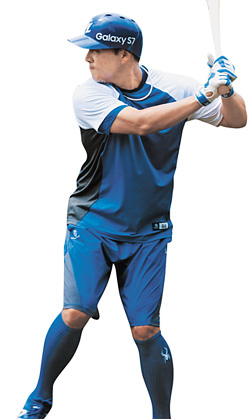 A. I feel very comfortable. Last year, I told myself to work harder because I’ll be retiring in two years, but now, I feel less pressured.

Did you change your swing to hit more home runs?

No, but last year, I did mention that I will be changing my swing to a leg-kick swing, lifting my right leg to have more force on impact to hit more home runs. Now, my swing is back to last year’s swing. I tried changing it during my training in Guam, but it was a mess. I couldn’t produce strong impact since I was trying to make a bigger swing.

Who would believe that Lee Seung-yeop still struggles with loosening up when hitting?

This is why baseball is hard. Unlike bowling, where there’s a perfect score of 300, there’s no such thing as being perfect in baseball. Baseball is a game of minimizing mistakes.

Have you thought about your last game?

I haven’t thought about that yet, but I really want to get to the playoffs and play at our new stadium, Samsung Lions Park in Daegu. This is my duty rather than my goal. For further ambition, I want our team to advance to the Korean series.

Will you be going through a “retirement tour” like other MLB players?

Yang Hae-yong, secretary general of the KBO, mentioned it in his interview. Since this has never been done in Korea, I am thankful and honored. I’ll be happy enough if I can greet the fans after my last game.

What is your career highlight?

Winning a gold at the 2008 Beijing Olympics. The home run that I hit in the eighth inning during the game against Japan in the semi-final was my best hit. At that time, baseball fans criticized me for my poor performance, so if I didn’t hit that home run, I would’ve been seen as a player who can’t perform in big games.

What is the one ball you want to keep?

I want to keep the ball from the 1995 opening game against the LG Twins. I hit my first base hit in a professional game against Kim Yong-soo of the former LG Twins as a pinch hitter. I really want it but it probably no longer exists now.

Were you ever tempted to use drugs?

Never. I am very sensitive about drugs. When the doctor recommended legal drugs for my finger injury, I didn’t take it. I always felt like my time as a baseball player was going to get shortened if I took drugs.

Do you think 36 will be a retired number?

At first, I didn’t like the number. Since I signed the contract late, the only numbers available to me were 36 and 53. At first, I was going to change the number after the first year, but I kept it because I continued to have good results with that number.

Do you think there will be a player to break your number of home runs record, 443 in the KBO league and 602 total from the Korean and Japanese league?

I was looking at Park Byung-ho of the Korea Baseball Organization (KBO), but he now plays in the MLB. Someone will come because batting can be improved through training.

What is your plan after retirement?

I’m planning on being either a coach, commentator or to go for overseas study. Also, I want to spend more time with my family and be a good father to my two sons.