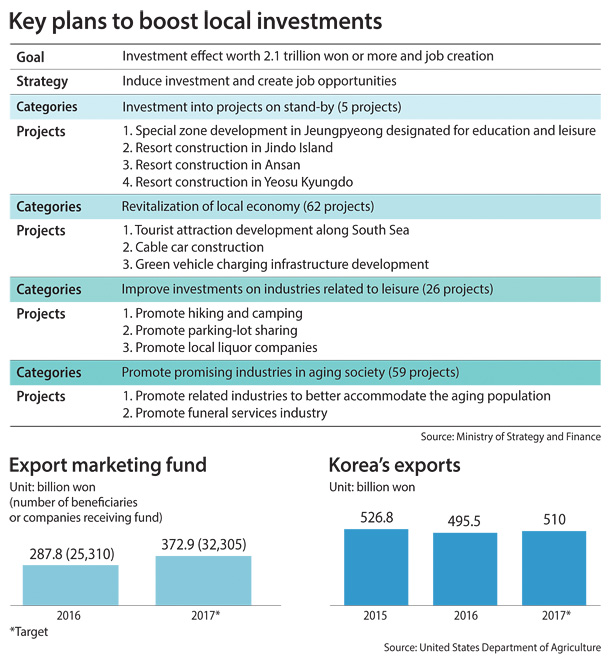 The government announced a set of measures on Monday to improve the tourism infrastructure in southern regions of the country, including the establishment of 438 kilometers (272 miles) of roads that will run along the southern coast of the country. The government also plans to transform abandoned establishments and buildings, such as closed-down schools or shipyards, into tourist attractions.

“The domestic market situation is very tough due to slow consumption and ongoing corporate restructuring,” said acting president and Prime Minister Hwang Kyo-ahn at a meeting at the Central Government Complex in central Seoul on Monday. “Southern regions that are hit hard by corporate restructuring are known for their natural environment and we believe it is possible to make the whole region a global tourist attraction, like the Aegean Sea in Europe, if we can come up with ways to diversify the regions’ tour packages.”

Data from the Bank of Korea shows that the tourism deficit last year stood at 9.4 trillion won ($8.3 billion), meaning spending by Koreans travelling overseas far surpassed that of foreign tourists visiting Korea. To remedy this, the Finance Ministry said eight cities and districts - Goheung, Yeosu, Suncheon, Gwangyang, Namhae, Hadong, Tongyeong and Geoje - were selected along the Jeju Strait to be fostered as a go-to maritime tourist destinations.

“Right now, most tourists who visit places in the southern part of the country such as Geoje, Yeosu and Tongyeong, are there for short-term stays only,” said Lee Chan-woo, the Deputy Minister of the Finance Ministry. “The plan is to develop a travelling route to allow tourists to traverse the country along the South Sea [Jeju Strait].”

The Finance Ministry explained that regional or city governments are in a fierce competition to attract tourists and often offer duplicate packages, undermining their uniqueness, a practice it intends to curb.

Based on the details of the plan, the roads that extend along the southern coastline will be connected to provide a driving course from one end of the peninsula to the other titled “Blue Coast Road.” Observatories and parks will be constructed at key points along the road.

“This is a long-term plan that will take place over the next 10 years,” explained Kim Jae-jung, chief of the territorial and urban development office at the Ministry of Land, Infrastructure and Transport. “Some part of the plan, however, can be actualized sooner, such as promoting family tour packages to Chinese travel agencies.”

The Deputy Minister of Finance Lee further pointed out the infrastructure development to accommodate the influx of tourists to the region as an important part of the plan. Along with financial and policy support for lodging facilities, the government is looking into using abandoned establishments and buildings.

For instance, closed-down shipyards will be purchased by Korea Land and Housing Corporation, a state-owned construction company in Korea, and regional authorities or private investors will be allowed to develop the areas as tourism complexes.

“With the local shipbuilding industry struggling, some shipyards are being abandoned, which take up a large chunk of land,” said Kim of the transport ministry. “We will use the budget by LH Corps to buy the land before deciding what to do.”

Kim added that Malmo, Sweden, successfully turned its shipyard into a tourist destination.

As Korea’s exports fell in 2015 and 2016, the government said it will try to diversify export markets by heading to emerging countries, instead of just depending heavily on China and the United States.

This year, the government plans to spend over 60 percent of its budget it has allocated for helping local companies market abroad in the first six months.

Also, the trade ministry said ASEAN, Middle Eastern countries and India are some of the new markets the government plans to focus on, as the number of middle-income households in such regions is rising.

The trade ministry, however, dismissed speculations of worsening trade relations between China and Korea due to Seoul’s decision to deploy a U.S. missile defense system in the country.

Other than promoting the tourism sector in Korea, the finance ministry also hopes to boost domestic consumption by having beer products produced by small brewers sold at local retail stores.

“Koreans are becoming more interested in high-end and diverse kinds of goods as their economic situation improves,” said Hwang. “However, some government policies are not meeting such trends.

For example, there are more than 500 kinds of beer brands that are competing with each other in Belgium. We need to come up with plans to revise regulations on local breweries so that many kinds of quality products can enter the market.”

Right now, products made by microbreweries cannot be sold in retail stores under the current liquor law, which stipulates that microbreweries in Korea can sell their products directly to consumers only on their own premises or in restaurants and bars. The plan revealed on Monday showed that the government will allow microbreweries to sell beers in local convenience stores.

Despite the wide range of measures, skepticism lingers, as critics argue that the government needs to come up with actual ways to have more people spend rather than relying on temporary events or promotions.

“The government’s plans to improve the tourism industry will have a positive impact for a short period of time, but they will not be permanent as they are not going to solve the structural problems, such as fall in real income and the weak labor market,” said Jin Yong-jae, an economist at HI Investment & Securities. “People are not spending in the country, not because they don’t have places to go, but because they don’t feel financially stable enough to travel around.”