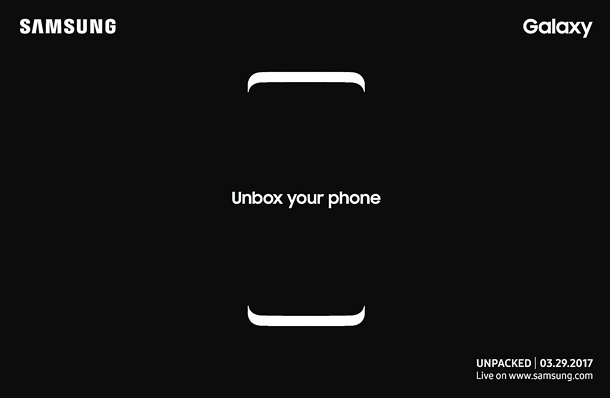 The tech giant released electronic invitations to its Unpacked event to the global press at Samsung’s press conference on Sunday to debut its tablet PCs a day before the 2017 Mobile World Congress kicked off in Barcelona, Spain.

The invitation comes in two colors, black and white, with the phone’s outline and the phrase “Unbox your phone.” The rounded bezels at the top and bottom of the device’s image indicate the phone will have a vertically full screen without a bezel.

The message for users to “unbox” raises expectations that the follow-up model to the blockbuster hit Galaxy S7 and S7 Edge will be something that breaks form with existing smartphones. The teaser video played by Samsung during the press conference at the MWC also backs up the assumption, as it showed the evolution of mobile phones from the 1980s until the 2000s.

The Unpacked event will be broadcast live on YouTube. The venue for New York will be Lincoln Center, and the one for London will be Here East, the digital quarter for East London and former media center for the 2012 London Olympics.

As the event to take the wraps off the eagerly-awaited Galaxy S8 is delayed from the routine late February at the MWC to a separate event in March, Samsung has devised a gimmick to promote the event by installing in four different locations its “Unpacked boxes,” physical boxes that encourage passersby to take selfies against the backdrop of them and to upload them on their social media accounts. The boxes can be spotted in the Catalonia Congress Center, Samsung’s press conference venue for the MWC; Fira Gran Via, the main venue for the MWC; Samsung’s new flagship building in New York, otherwise called New York 837; and Suwon Digital City, Samsung’s headquarters. Samsung plans to add more locations.

Notably, the Galaxy Tab S3 has applied the sound technologies of AKG Acoustics, an Austrian premium audio device manufacturer under Harman International. Harman is an American audio and automotive component giant that Samsung is set to acquire by June. The tablet PC, the first outcome of the collaboration between Samsung and Harman, comes with AKG’s high-end earphones.

Galaxy Books - in 10.6 inch- and 12-inch versions - are the tablets with pop-on keyboards - close to Microsoft’s Surface Pro 4 but skinnier and faster. The improved version of the Galaxy Tab Pro S operates on Windows 10 and sports a redesigned S Pen stylus that doesn’t require charging.

“The additional attention that Samsung has given here to audio, industrial design and overall performance couple that display advantage with an understanding that premium products require similar attention to every detail,” said Rhoda Alexander, director of market research firm IHS Technology.