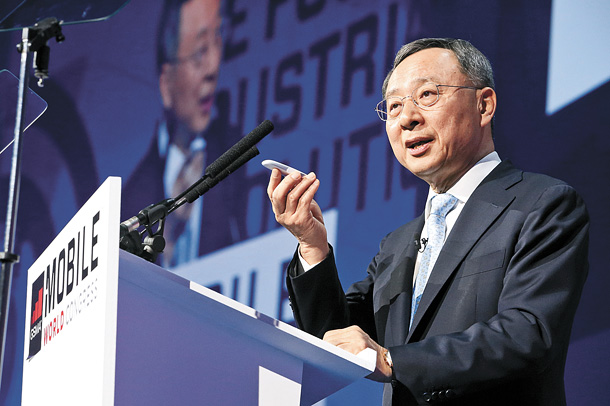 Hwang Chang-gyu, chairman and CEO of KT, delivers a speech at the Mobile World Congress in Barcelona, Spain, on Monday. [KT]

Hwang Chang-gyu, chairman and CEO of KT, said Monday that his company would launch 5G network to succeed its current 4G service by 2019, a year earlier than expected.

During a keynote address at the Mobile World Congress in Barcelona, Spain, Hwang said, “5G is set to go beyond enhancing the current network - it will bring a whole different world.”

The telecommunications industry had set a target date of 2020 to launch the successor of the currently prevailing 4G network, which also includes LTE. The 5G network promises to allow all sorts of objects, including mobile devices, computers and appliances, to be connected via networks with the capacity to transmit huge amounts of data.

Hwang argued that the earlier 5G service is deployed, the better competitiveness KT will have, largely because the networking technology is essential in artificial intelligence, robotics and big-data applications. Early introduction of the service would also benefit Korean mobile device manufacturers, he said.

“5G-based intelligent networks combined with cutting-edge ICT such as location, security, control solutions, big data and AI will change the world,” he said. “Mobile communication service providers from all over the world need to cooperate with each other to develop 5G-based intelligent networks as the key to solving mankind’s immediate issues such as climate change and infectious diseases.”

A day earlier, a contingent of telecom operators and device manufacturers - from Korea’s SK Telecom and LG U+ to AT&T, NTT Docomo, Qualcomm and Huawei - expressed support for acceleration of 5G standardization, which would allow large-scale trials and deployment as early as 2019.

They proposed a December 2017 deadline for specification documents related to a configuration called Non-Standalone 5G New Radio, which will utilize existing LTE waves to partially enable 5G service starting in 2019.

During Hwang’s speech, the screen behind him displayed 5G-based media services to be presented at the 2018 PyeongChang Winter Olympics, such as Sync View and Time Slice which provide 360-degree coverage of bobsleigh and figure skating competitions.

The speech was Hwang’s second at the annual trade show. In 2015, he first conveyed the possibilities of 5G technology.

The CEO, who long spearheaded the semiconductor business at Samsung Electronics before joining the telecom operator, had his three-year term extended in January.

KT took part in the Mobile World Congress with five of its smaller partners in the tech sector hoping to find success in the global arena.