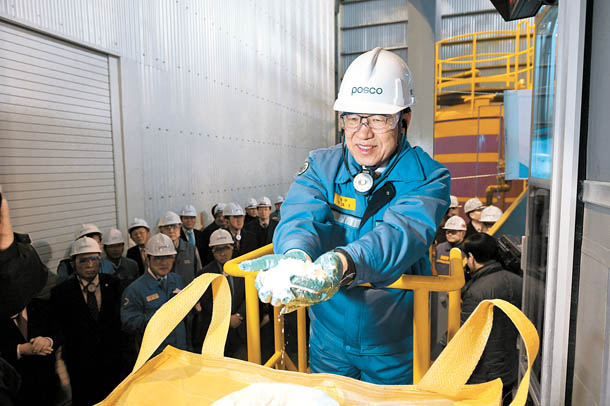 Posco is reinforcing its non-steel business with major companies in the field. Since President Kwon Oh-joon took office, Posco has been wrapping up the reorganization of its company structure. While its steel business is faring well in the midst of the economic downturn, the company is also focused on its non-steel ventures that seem more promising for the future. Therefore, the company has changed its system so that the new Chief Operating Officer will take over the steel industry and President Kwon will focus on the non-steel business and overall management.

Recently, Samsung Electronics chose Posco’s magnesium sheets for its new Samsung Notebook 9 Always. Since 2016, the company has supplied these sheets for the Notebook 9 series, Samsung’s premium laptop product line, to make them lighter and more durable.

Previously, Samsung used magnesium-lithium sheets from foreign suppliers, which were malleable yet lacked hardness. However, Posco successfully developed light and solid Air-Magnesium sheets that can be easily processed and remain durable.

In 2012, the company collaborated with the Research Institute of Industrial Science and Technology to commercialize secondary battery material production technology, called Gradient. Finally, the research team developed technology to mix lithium with nickel, cobalt, and manganese to make secondary batteries. As a result, the batteries can now store 20 percent more energy. Since January, the company has been supplying these battery materials to LG Chem.

Since 2015, Posco’s magnesium sheets have been used in the speakers in Ssangyong’s Korando C. The magnesium vibration sheet is a core part of a speaker, directly influencing the quality of sound. Previously, many have used paper to make the vibration sheet, which was not rigid enough to produce high-pitched sound. However, the magnesium sheet is said to be the best material for speakers so far, as it is light and compact. It covers a wide range of notes and reduces unnecessary noise.

Moreover, Posco worked with Renault Samsung Motors to develop car parts made with the magnesium sheets. By using them between car seats and the trunk, the company was able to produce a lighter car.

The improved car part is 60 percent lighter than it was when it was made with the previous material.