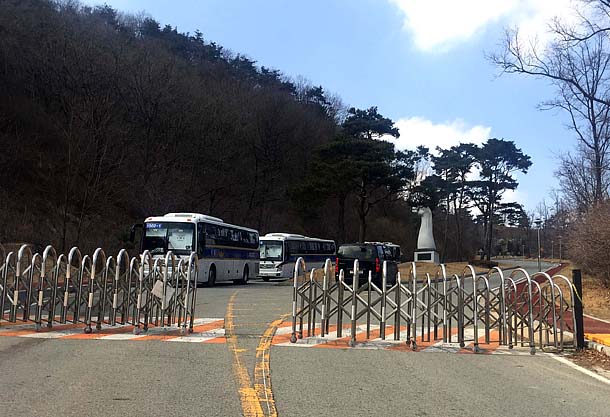 Police buses are deployed at the Lotte Skyhill Seongju Country Club in Seongju, North Gyeongsang, on Monday to prevent anti-Thaad protesters from storming the site. [YONHAP]

In a meeting of the board of directors on Monday, Lotte Group approved the transfer to the government of its golf course in Seongju County, North Gyeongsang, where the U.S.-led Terminal High Altitude Area Defense antimissile system, or Thaad, is to be deployed later this year.

The Ministry of National Defense said in a statement Lotte’s board of directors agreed to swap the Lotte Skyhill Seongju Country Club with government land in Namyangju, Gyeonggi.

Lotte International, the operator of the golf course, is expected to sign the land swap contract with the Ministry of National Defense as early as today, which comes nearly four months after its country club was selected as the government’s choice to deploy the antimissile system.

Seoul and Washington announced last July they will deploy a Thaad battery in South Korea, which has been a hot potato topic for years, to counter Pyongyang’s missile threats.

The government decided on an artillery base in Seongsan, Seongju County, as the optimum location initially but had to seek a new option after fierce backlash from local residents who were concerned about health and environmental effects of the battery’s powerful AN/TPY-2 radar.

After another review, the Defense Ministry decided upon Lotte Skyhill golf course on Sept. 30 as the new location to place the Thaad battery. The ministry on Nov. 16 agreed on the land swap deal with Lotte International.

While the Defense Ministry initially expected the land swap deal to be sealed last month, Lotte delayed its board meeting amid strong backlash by China over the deployment of Thaad to Korea. Beijing has taken a series of unofficial retaliatory measures against Korean businesses, including entertainment projects.

Following an evaluation of the environmental impact of the site, the golf course will undergo necessary construction for the installation of the Thaad battery.

After the golf course is acquired, it will be transferred to the U.S. Forces Korea in accordance with the Status of Forces Agreement, or SOFA, between the two countries. Moon Sang-kyun, spokesman of the Defense Ministry, said in a briefing Monday, “There is no change in our target of deploying the Thaad within this year.”

The battery is generally expected to be deployed around June.

“It is true that Lotte faced great losses in its businesses in China because of the issue about the land for Thaad,” a Lotte official said. “The decision was reached taking into consideration the broader view.”

Geng Shuang, the Chinese Foreign Ministry spokesman, said in a briefing on Monday on Lotte’s approval to transfer the land for the deployment of Thaad, “The United States and South Korea pushing for Thaad is a serious destruction of the strategic equilibrium in the region and damages the security interests of countries including China and is not helpful to the protection of peace on the Korean Peninsula.”

He expressed “regret” that Seoul chose to ignore Beijing’s concerns and chose to “cooperate with the United States to accelerate the deployment.”