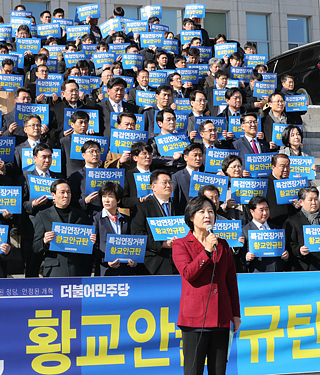 Lawmakers of the main opposition Democratic Party denounce acting president Hwang Kyo-ahn on the stairs leading to the main building of the National Assembly in Yeouido, western Seoul, on Monday, after Hwang rejected the request by the independent counsel to extend the special investigation into the corruption scandal involving President Park Geun-hye and her associates. [YONHAP]

Liberal opposition parties threatened Monday to impeach the country’s acting leader after he decided not to extend the independent counsel’s special investigation into the corruption scandal involving impeached President Park Geun-hye, her associates and conglomerates.

Prime Minister Hwang Kyo-ahn, the acting president since Park’s impeachment in December, rejected Monday independent counsel Park Young-soo’s request for a 30-day extension of his probe. With the refusal, the independent counsel team will wrap up its 70-day probe tomorrow.

“After a long deliberation, I decided to reject it,” Hwang said. “Insufficient parts of the probe should be handed over to the head of the district prosecutors’ office, which has the jurisdiction. If necessary, I will provide necessary manpower and reinforce the organization to satisfactorily conclude the investigation.”

He also added that political parties could push forward a new independent counsel probe, if an additional investigation is deemed necessary in the future.

“Over the past four months, massive protests supporting and opposing the impeachment are taking place,” Hwang added. “Politicians also failed to agree on the extension of the independent counsel probe. Depending on the Constitutional Court’s decision, the presidential election may take place early, and I have to consider politicians’ concerns that the independent counsel investigation may influence the election.”

Hwang also said he believes the independent counsel had served its purpose, as stipulated by the law. The team has prosecuted or is capable of prosecuting key suspects based on its investigation so far, he said.

Over the past months, the independent counsel team questioned powerful members of the government and the country’s largest conglomerate, as well as President Park’s controversial friend, Choi Soon-sil. Among those questioned and detained include Samsung Group’s de factor leader, Lee Jae-yong.

The team, however, failed to question President Park. She was scheduled to be questioned earlier this month but canceled the session, complaining about a media leak about the plan.

Assistant independent counsel Lee Kyu-chul said Monday that the team will give up on its plan to raid the Blue House and question the president as the probe will have to wrap up tomorrow. He said Park refused audio and video recording of the questioning, after their first plan was scrapped. Since then, their negotiation had no progress to arrange a new schedule, he said.

Lee also said the search and seizure warrant the Seoul Central District Court issued for the team will expire tomorrow. “We believed the raid of the Blue House was absolutely necessary and decided to conduct it on Feb. 3, but our attempt was blocked by the presidential chief of staff and the head of the presidential security service,” Lee said. “It is extremely regretful that a lawful warrant issued by a court was blocked. The legislature must take a measure to preventive a recurrence of a similar situation.”

Following Hwang’s rejection of the probe extension, liberal opposition parties vowed to impeach the prime minister. The Democratic Party, the People’s Party and the Justice Party agreed to impeach Hwang.

The conservative opposition Bareun Party said it will not join the move to impeach Hwang, but agreed to support the liberal parties’ plan to pass a bill to launch a new independent counsel probe. Floor leaders of the four parties agreed Monday to open an extraordinary legislative session in March for the plan.

They said the new independent counsel bill will be designed to allow the current special prosecutor, Park Young-soo, to continue to control the probe. The opposition lawmakers also increasingly pressured National Assembly Chung Sye-kyun to introduce the bill directly for a voting to bypass the ruling Liberty Korea Party’s objection to discuss the plan.

The ruling Liberty Korea Party said Monday that it supports Hwang’s decision to reject the extension request of the independent counsel probe. It also issued a statement to condemn the opposition parties’ attempt to impeach Hwang.

“This is an abuse of majority power in the National Assembly,” it said. “Impeaching the acting president, appointed by the constitutional procedure, is an idea that transcends the constitution.”

The party also said the country is experiencing unprecedented chaos, and the opposition parties must not start another administrative paralysis and crisis by impeaching the acting president.