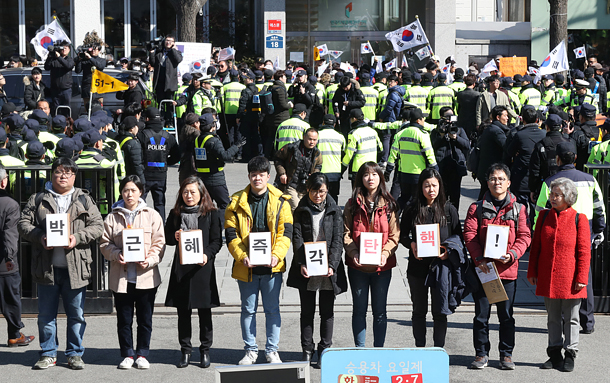 Anti-Park Geun-hye protesters, front, and pro-Park supporters stage rallies, separated by police for safety reason, in front of the Constitutional Court in Jae-dong, Jongno District, central Seoul, on Monday as the court holds a closing argument session in the trial to decide whether to remove President Park from office. [YONHAP]

The Constitutional Court heard Monday closing arguments for President Park Geun-hye’s impeachment trial and began deliberation to decide the political fate of the disgraced leader, wrapping up the 81-day courtroom battle between Park and the National Assembly.

Despite the court’s recommendation for Park to make her final argument in person in the courtroom, she did not attend her trial’s closing session. Park submitted a statement, instead, to plea her innocence and denied all charges against her.

“I did not go after private gain,” she argued. “I apologize for hurting the people’s hearts with my carelessness in supervising my associates.”

The National Assembly overwhelmingly passed a motion to impeach Park on Dec. 9, 2017 over her alleged constitutional and criminal violations by allowing her secret inner circle, including a longtime friend Choi Soon-sil, to interfere in state affairs. She was also accused of nonfeasance during the crucial early hours of the rescue operation of the Sewol ferry’s sinking in April 2014, in which more than 300 passengers died.

At the final hearing, Rep. Kweon Seong-dong of the Bareun Party, the head of the impeachment committee of the National Assembly, and three lawyers representing the committee went first to give their final arguments to stress the legitimacy of the lawmakers’ decision to impeach the president. The committee, which acts as the prosecution in the trial, stressed the graveness of Park’s violations and appealed to the judges to permanently remove her from office.

Kweon asked the court to remove Park from office to declare “the victory of the people yearning for justice.” He said the court must show that the Republic of Korea, a democracy, is not a dishonorable country by holding her accountable.

Lee Young-gu, a lawyer representing the committee, gave a separate argument to highlight the need to remove Park for her violation of the duty to protect the lives of the citizens during the Sewol’s sinking. “We have no idea what she did on the day of the tragedy,” he said. “But what we know clearly is that she did not do what she should have done.”

During the trial, the court asked Park to submit a detailed statement on what she did during the first seven hours of the tragedy. Her statement was called insufficient by the judges, and the court’s request for an improved report. She did not submit one.

He said there was enough time to rescue the passengers, but Park had done nothing to save them during the window of opportunity.

The National Assembly said Park “actively violated the fundamental principles of the rule of law and a democracy” by using the government to satisfy her private gains with aggressive and meticulous plans. It said the constitutional system, therefore, was seriously infringed upon by the president.

Lee Dong-heub, one of Park’s lawyers and a former justice of the Constitutional Court, then read a statement, submitted by the president to deny all charges raised by the National Assembly.

Park reiterated her previous positions that she had not been aware of the corruption of her associates, including Choi. While rejecting all legal responsibilities, Park admitted only her moral responsibility over the scandal. Park denied that she gave Choi power to influence policy decisions, public servants appointments and foreign affairs of the country.

She also rejected the nonfeasance charge against her during the Sewol’s sinking. She said she was no rescue operation expert, so she did not want to actively intervene in the process and waited for reporting. She also denied the suspicion that she received a cosmetic treatment during the early hours of the tragedy and thus was incapable of reacting timely and properly.

Park also continued to defend her pet projects, the Mi-R and K-Sports Foundations, allegedly used by Choi and her associates to extort money from conglomerates. Choi is currently standing her own criminal trial over the scandal involving the country’s largest business groups, including Samsung.

“Including Samsung Vice Chairman Lee Jae-yong, I have never given special favors to any company,” Park said. “I have never earned any unlawful gain.”

Independent counsel Park Young-soo, based on its investigation, said Samsung’s massive donations to the foundations and conspicuously generous supports for Choi’s daughter’s equestrian training are bribes to Park for her support for the conglomerate’s third-generation management transfer to Lee. The investigators suspected that Park pressured the state-run health insurance corporation to approve a controversial merger of Samsung’s two units to solidify Lee’s control over Samsung Electronics.

Lee also pleaded before the court that Park must not be removed. “She has done everything with good intentions, but ended up failing to prevent the corruption of her associates,” Lee said. “It only deserves political and moral criticism.”

Lee said Park already gave three public apologies for her failure to oversee her friend and aides. “Amid the intensifying split among the people, kicking out the president will make Korea’s future more insecure,” Lee said. “It is desirable to give the president a chance to resolve the confusion and mend the rupture for the sake of the future.”

Since the abuse of power and influence-peddling scandal emerged in October, Park issued three apologies, but never faced any questioning. While the prosecution and the independent counsel identify her as a suspect of extortion and bribery and the Constitutional Court asks her position, Park has made no official statement before the country’s justice system.

In her second apology in November, she said she will submit to an investigation by the prosecution and a probe by the independent counsel if necessary. “I am frankly admitting to my wrongdoings and seeking the people’s forgiveness,” Park said. She, however, refused to submit to the investigation by the prosecutors, calling the probe “biased.” The prosecution named her a co-conspirator of the corruption charges involving her friend and associates.

Park also evaded the independent counsel’s plan to question her earlier this month. She also made no appearance in her trial, as the Constitutional Court turned down her demand not to be questioned by the National Assembly and the judges in the courtroom.

Following the closing arguments, the eight judges of the court will start a conference to rule on the case. “They will likely meet everyday to discuss the case,” said a source from the court. Following the discussion, a voting will take place. Six votes are required to remove the president.

In the legal and academic communities, anticipations are high that the ruling will be made before March 13, 2017, the retirement date of Acting Chief Justice Lee Jung-mi.